Pune – Guide to get behind the skin of the city

An elderly woman deftly strung jasmine buds into garlands at her flower stall outside the Kasba Ganpati temple. She looked up at us occasionally—a motley group of individuals exploring the older parts of Pune on a crisp winter morning. Her routine existence was, for us, a peek into the heart of the city.

Pune has always been one of my favourite weekend getaways from Mumbai with friends or family. The city’s pleasant weather provides a welcome respite from Mumbai’s balmy climate, as does its laid-back vibe. Yet after many encounters, I realised there was a side of this city unknown to us. I knew its IT prowess and cutting-edge automobile companies. I knew the leafy avenues of Pune Cantonment, and the chic cafés and boutiques of Koregaon Park, but what I was about to discover was the older part of the city where life still goes on as it has for generations.

On our guided tour of old Pune, history unfurled at every corner (www.puneheritagewalk.com; from ₹250 per person; Sat-Sun 7 a.m.). It is also possible to explore old Pune on your own, starting at Shaniwar Wada and visiting the many historical sites that are within walking distance, or following the trail below. 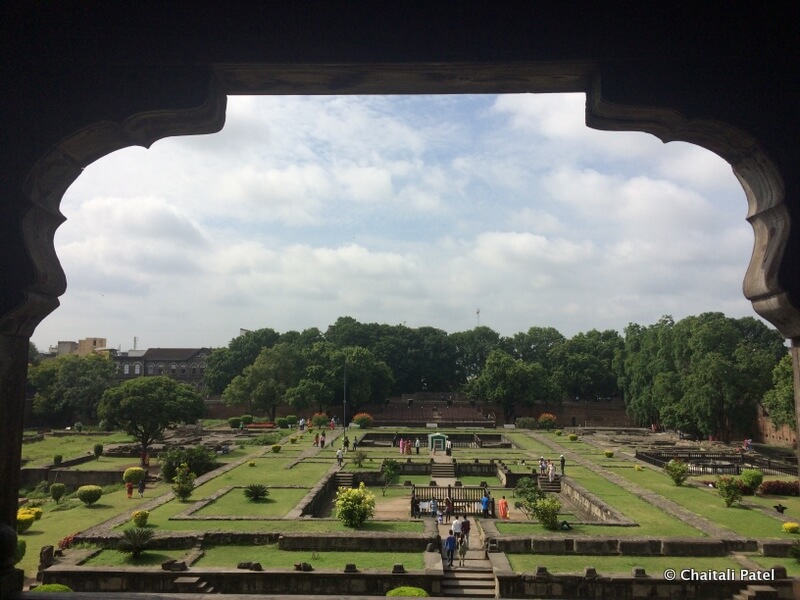 Vistors walk amongst the ruins of Shaniwar Wada

The Peshwa ruler Bajirao I built his grand residence Shaniwar Wada on the right bank of the Mutha River. Tales abound of the magnificence and opulence of Shaniwar Wada, but a fire in 1828 reduced the complex to ashes. Today, it is a shadow of its former self. Among the few standing structures are the fortified boundary walls and the Dilli Darwaza or Delhi Gate—named because it faces Delhi directionally. We walked around gardens set amidst ruins, trying to recreate in our imaginations the grand structure that was a symbol of Peshwa power and might. 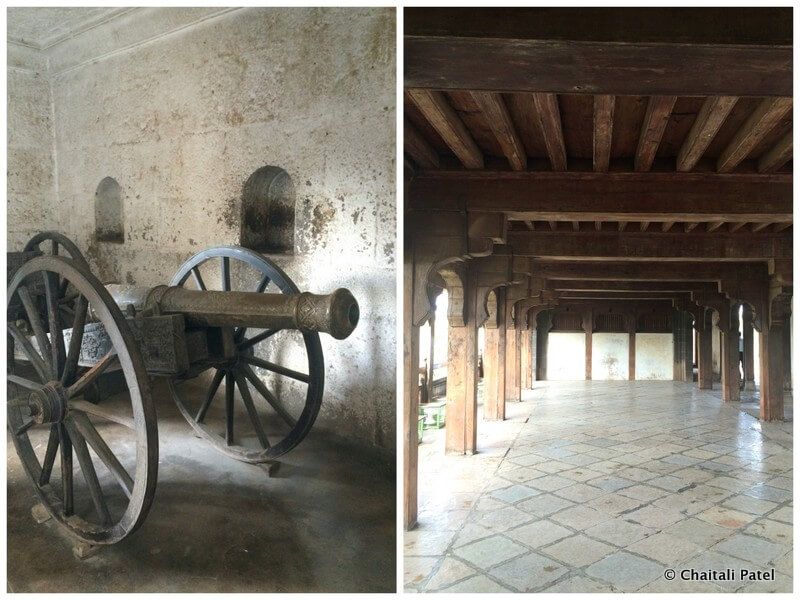 Few remnants of a time gone by and of better days

Behind the pomp and glory of the past are stories of betrayal that led to the eventual fall of the mighty Peshwas. After Bajirao I’s son Balaji Bajirao died, the mantle eventually fell to his youngest son, Narayanrao. Barely a year after he ascended the throne, his jealous uncle and aunt plotted his murder. Narayanrao was chased down the corridors of Shaniwar Wada, and eventually brutally killed by the conspirators. It is said that even today, on a full moon night, you can hear his desperate cries for help (Shivaji Road; open 9 a.m.-6 p.m.; entry Indians ₹15, foreigners ₹200).

A few minutes’ walk from Shaniwar Wada is the reconstructed Lal Mahal, Chhatrapati Shivaji’s official residence in the city. Shivaji spent his childhood and married his first wife Maharani Saibai here. In 1645, he moved to Torna Fort on the outskirts of Pune and Lal Mahal fell into ruin. Despite the historical significance of the site, the reconstructed mahal was not very visually appealing so we didn’t stay long.

We lingered instead at Kasba Ganpati temple, closely tied to Pune’s history. The temple was originally built by Shivaji’s mother Jijabai next to their home, to house a Ganesha idol that was found in Pune. This idol of the Kasba Ganpati is considered the gramadevta or the guardian deity of the city. In old Pune, the belief in Kasba Ganpati has survived the test of time.

Walking five minutes southwest down narrow lanes, we came to the 19th-century home of  Bhau Lakshman Javale , an acclaimed Ayurvedic doctor. Born into a family of dyers, and fondly known as Bhau Rangari, he and two others started the public celebration of Ganesh Chaturthi as we know it today. In the late 1800s, at a time when Indians across different castes were not allowed to interact and congregate, Bhau Rangari’s sarvajanik Ganeshotsav became a way of uniting people. A few buildings away from his house, the original idol from 1892 made of paper and pulp is still displayed in a small shelter. Modest in size, but not lacking in impact, Ganpati is shown slaying a demon, symbolizing freedom from the colonizers ruling India at the time.

As we turned onto bustling Bajirao Road, we saw majestic Vishrambaug Wada. Despite the chaos around, the red facade was a restful sight with an ornamental balcony overlooking the road and carved pillars, each said to be made from a single teak tree. In the early 1800s, Peshwa Bajirao II built this complex as his residence, and lived here until he was arrested by the British. The wada today houses an exhibition on Pune’s history through the centuries, a handicraft shop run by a local NGO, and a post office. The mansion’s intricately carved wood pillars and window frames offer a peek into its glorious past. Our guide tells us that when the mansion was built, the Peshwa would spend ₹60 a year, a small fortune at the time, to hire people to light hundreds of oil lamps around the complex (open Tue-Sun 10 a.m.-7 p.m.; entry ₹10).

Across the road from Vishrambaug Wada, I spotted an outlet of the iconic Pune sweet and farsan store, Chitale Bandhu Mithaiwale. I dashed over to get my hands on every Punekar’s favourite snack: bhakarwadi, a savoury and spicy namkeen, with a hint of sweetness. It was barely an hour since the shop had opened, but packets of fresh hot bhakarwadi were flying off the shelves(Bajirao Road, Sadashiv Peth; 020-24473208; chitalebandhu.in). 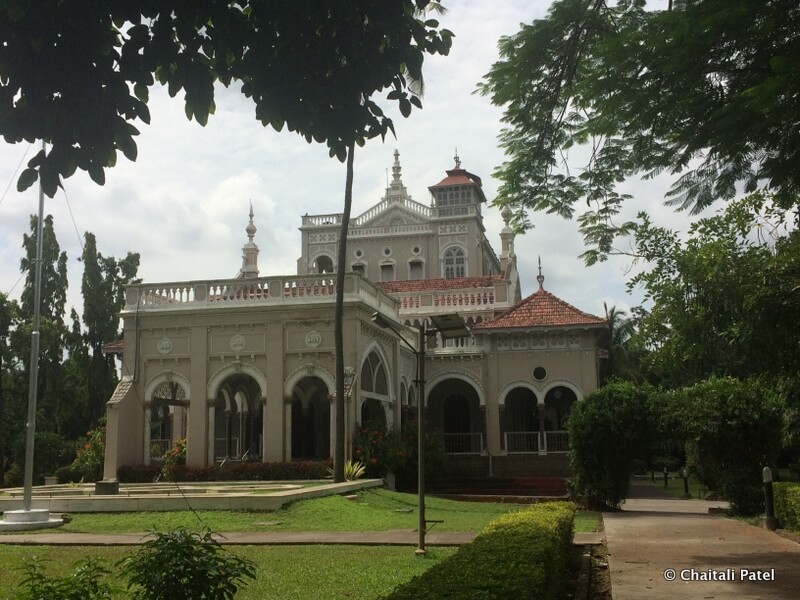 The Palace was built by Sultan Muhammed Shah Aga Khan III to provide employment to the people living around Pune, who were struck by a terrible famine in the late 1800s.

Even outside its old city, Pune has plenty of history. In Yerawada, nine kilometres away, stands the splendid  Aga Khan Palace . In 1892, Sultan Muhammad Shah Aga Khan III commissioned the building, set in a 19-acre plot, to generate employment in a city then struck by famine. The building played a vital role in India’s freedom struggle, as it was here that Mahatma Gandhi, his wife Kasturba Gandhi, his secretary Mahadev Desai, and Sarojini Naidu were imprisoned. 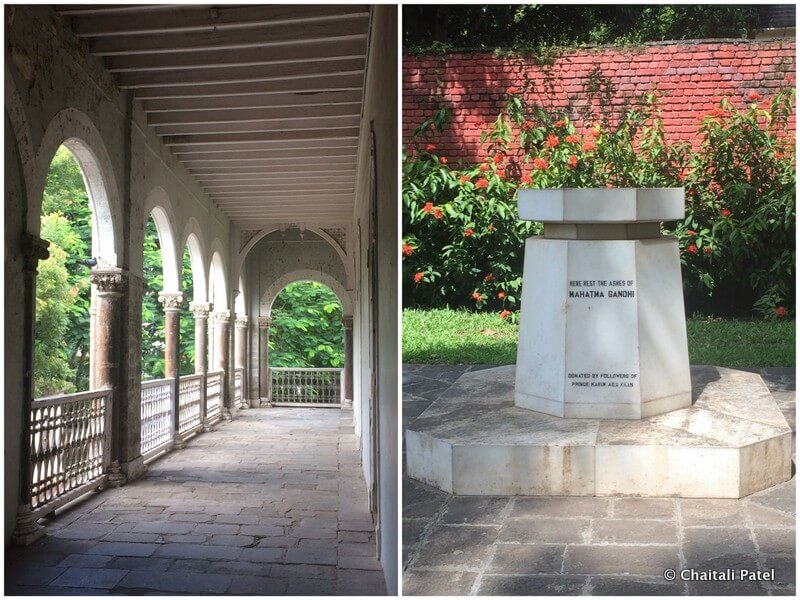 Verandahs that have so many tales to tell (left). The samadhi of Kasturba Gandhi is a small stone structure with a tulsi plant growing in it (right).

The rooms on the ground floor display paintings and rare photographs depicting the life of Gandhi. Also on display are some of his personal belongings like letters, clothes, utensils, and books. Walk across the well-maintained gardens to the side of the building to see the samadhis of Kasturba Gandhi and Mahadev Desai, both of whom died here in captivity (open daily 9 a.m.-5.30 p.m.; entry Indians ₹15, children under 15 free; foreigners ₹100).

Pune has always attracted the young and the elderly. For retirees, the slow pace of life, the small-town vibe, and pleasant weather are the biggest draws. A large number of renowned educational institutions specialising in everything from economics and film to law, bring thousands of students to the city, resulting in a thriving cultural scene.

Koregaon Park, known for the hippie German Bakery and the controversial Osho Ashram, is the perfect neighbourhood to experience this modern side of Pune. Between large palatial bungalows and parks, you will find some of the city’s finest boutiques, restaurants, and bars. Arthur’s Theme is known for its delectable European fare (No. 2, Vrindavan Apts, Lane No. 6; 020-26152710). The all-vegetarian Italian joint Dario’s serves up delicious handmade pastas (Lane 1, North Main Road; 020-26053796; www.darios.in). Many Punekars take pride in growing and eating organic food; to sample some farm-to-table produce, go to the restaurants at ABC Farms. Started in the early 1990s, this group of restaurants uses fresh produce grown on their farm on the city’s outskirts (Survey No. 35/36; 020-26880555; abcfarms.com).

This is also a city with a superb live music scene with most of the action centred around Koregaon Park. From jazz to rock, there is a band for everyone and a gig on most nights of the week. The High Spirits Cafe (North Main Road, After Kalyani Bridge; 86000-63174; dahigh.com), Swig Bar & Eatery (28/2, SBI Training Centre, North Main Road; 9960466417), and Shisha Café (ABC Farms; 020-65200390; shishajazzcafe.in) are favourite venues in the city, with an exciting roster of local and international acts through the week.

Pune is a beer lover’s paradise with numerous microbreweries offering craft beers ranging from traditional weiss (wheat) brews to adventurous ones with underlying flavours like Ratnagiri mango, lemongrass, and jaggery. Effingut Brewerkz is popular for its traditional beers with interesting spice and fruit additions (Serenebay, Lane 6, South Main Road; 8390907410; effingut.com). Independence Brewing Company is an elegant space with tasty wheats and malty stouts on offer (79/1, Zero One Complex, Pingale Vasti, Mundhwa; 020-66448308; www.independencebrewco.com). Doolally or the 1st Brewhouse as it is now called is among the earliest microbreweries in the country, serving up a flavour packed apple cider (The Corinthians Resort and Club, NIBM Annexe, Mohammed Wadi; 020-30189660; www.thecorinthianspune.com).

With a large number of business travellers, Pune has international chain hotels like the Taj, JW Mariott, Hyatt, and Hilton.

Pune has always prided itself on having great local Maharashtrian favourites as well as food from other parts of India and the world. Located on the busy Fergusson College Road, Pune’s popular South Indian restaurant, Vaishali is worth a visit at any time of day (1218/1, FC Road; 020-25531244; vaishalihotel.in; meal for two from ₹500). Getting a table here is a matter of great patience and effort. Try their wafer-thin sada dosas, and crisp-but-soft sabudana vadas, and wash it all down with some strong filter coffee served in tall glasses. 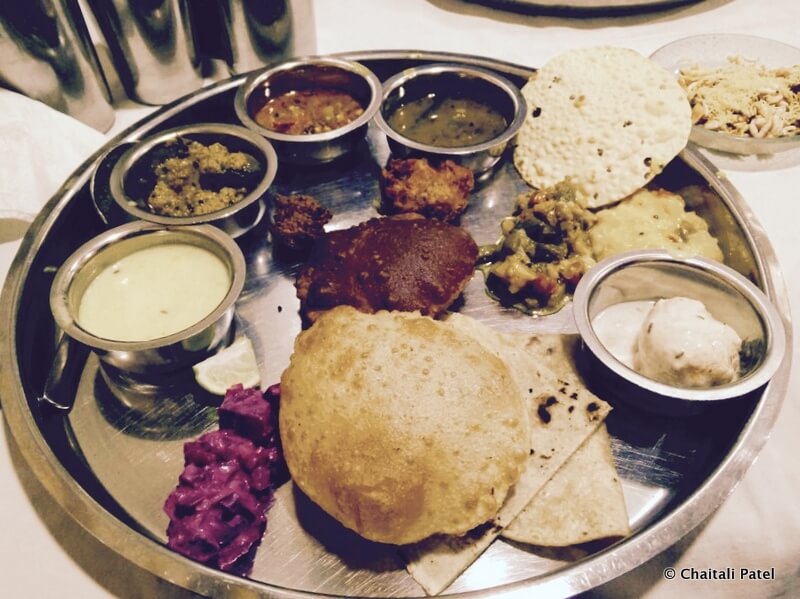 The all you can eat vegetarian thali at Shreyas is a medley of colour and flavours.

The Maharashtrian thali at Hotel Shreyas is authentic, and popular with locals, especially during Ganapati. Ukadiche modaks or steamed modaks are available year-round (020-25531963; www.hotelshreyas.in; meal for two from ₹600). For Pan-Asian food, head to Malaka Spice (Lane 5, North Main Road, Koregaon Park; 020-26156293; www.malakaspice.com; meal for two from ₹2,000), which is a restaurant and bar coupled with an art gallery.

Kayani Bakery on East Street is an old-time Pune institution and a fantastic place to stock up on food souvenirs like the melt-in-your-mouth, buttery Shrewsbury biscuits. Other favourites are their khari, nan khatai, and a variety of cakes. Go early as everything sells out fast (6, Dr. Koyali Road, East Street; 020-26360517; Mon-Sat 7.30 a.m.-1 p.m. and 3.30-8 p.m.).

Published in the December 2016 issue of National Geographic Traveller India magazine as “Time Travelling in Pune”. Read it on natgeotraveller.in here.