It was just pure simple coincidence that we were visiting Pune in the thick of the 10 day Ganapathi festival that’s celebrated with great gusto across the state of Maharashtra, as well as in other parts of India. In February this year, on a visit to Pune, I had gone on a heritage walk through the older parts of the city. I intended to do the walk again to carry out research for an article that I am working on, but as luck would have it, the walk was cancelled on the Sunday that I was there. As if by divine providence the organisers of the walk were hosting another walk on the same day, but this was no ordinary walk – it was one that took us to the 5 most revered Ganesh pandals (temporary shrines) in the city. I was possibly the last person to get on the list that had 55 others registered for the walk that day.

What is Ganesh Chaturthi and how is it celebrated?

Believed to be the remover of all obstacles, Ganesh, Ganapathi or Vinayaka – the elephant headed Hindu god is widely worshipped across India, and Ganesh Chaturthi is celebrated in his honor both by families as well as publicly. According to wikipedia: “Chaturthi  means “fourth day” or “fourth state”. Celebrations are traditionally held on the fourth day of the second fortnight in every month known as “Vinayaka Chathurti“, but the biggest annual celebration in the month of Bhaadrapada in the Hindu calendar, usually is August or September in the Gregorian calendar. The festival generally lasts ten days, ending on the fourteenth day of the fortnight (Anant Chaturdashi).”

Neighbourhoods, establishments and communities build a pandal and install an idol made of clay, papier-mâché or most commonly plaster of Paris, followed by worshipping the idol as a group. At home, families install smaller size idols, and friends and relatives visit each other’s homes partaking in each others festivities. Immersion of idols in water marks the end of the festival.

Preparations for the festival begin months in advance, with people placing orders for their idols and sculptors customizing them according to individual requirements. On the day of Chaturthi idols are installed in the pandal or at home accompanied by much fanfare. Public celebrations are funded by organizations and local communities and each year a lot of attention is paid to both the design of the idol and the pandal.

While in different parts of India, different sweets are made in honor of Ganesha, in Maharashtra, modaks or a sweet similar to a steamed dumpling, stuffed with coconut, jaggery and cardamom, is the most popular offering. Ideally, an offering of modaks should have 21 pieces of the sweet.

While there are no written records as to when people started celebrating Ganesh Chaturthi, it is said that the festival was celebrated publicly in Pune during the reign of Chhatrapati Shivaji (1630 – 1680), the founder of the Maratha empire. According to Wikipedia, “The Peshwas (hereditary administrators of the empire from 1718 until its end in 1818) encouraged the celebrations in their capital, Pune, since Ganesha was their family god (Kuladevata). With the fall of the Peshwas, the Ganesha festival lost state patronage and became a private family celebration in Maharashtra until its revival by Indian freedom fighter and social reformer Lokmanya Tilak.”

The first public celebration of Ganapathi as we know it today was revived in 1892, by Bhausaheb Laxman Javale, Balasaheb Natu and Krishnajipant Khasgiwale. While each of them had their own celebrations, it is Bhau Rangari’s (as Bhausaheb Laxman Javale was fondly referred too) that continues till date. One of the highlights of our walk was visiting Bhau Rangari’s house and his Ganapathi pandal that has the papier-mâché idol from 1892.

Lord Ganesha is shown vanquishing a rakshaas or demon. 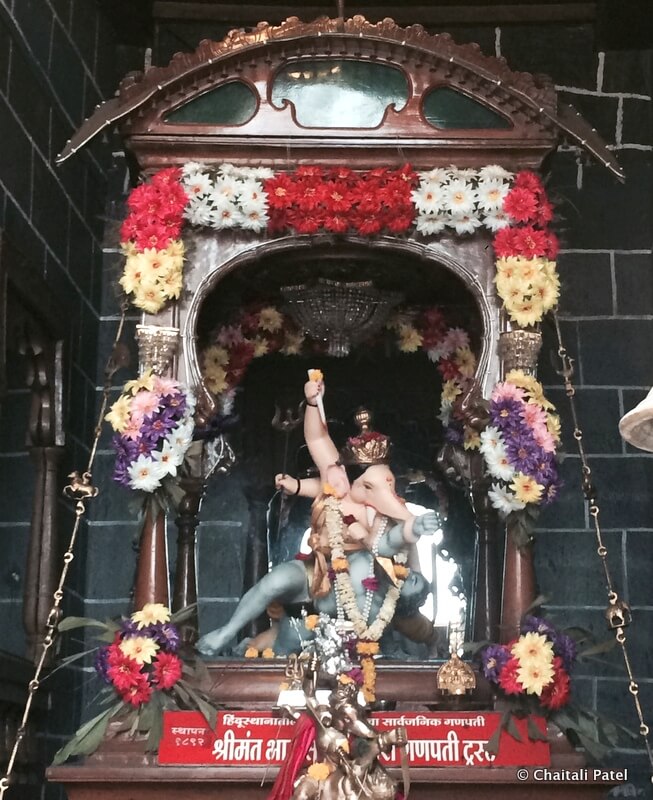 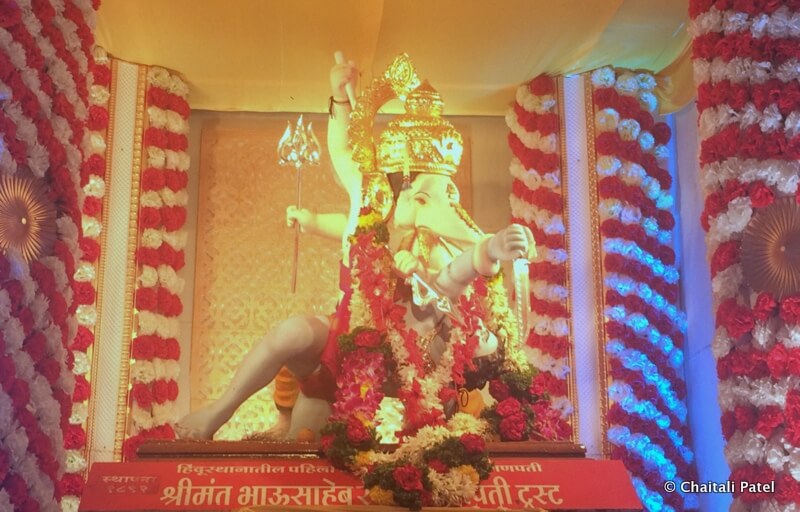 The idol all decorated for the Ganesh Chaturthi festivities

The following year, Lokmanya Tilak praised the public celebration of the festival in his newspaper Kesari, and went on to install an idol in his newspaper’s office. This gave the festival a huge impetus and Sarvajanik Ganesh Utsav or community celebration of the festival took off in a big way. At the same time, India was in the midst of her freedom struggle and the festival served as a platform to unite people. People from all walks of life came together to celebrate Ganesha, and the festivities included dance, music, poetry and performance of plays, igniting patriotism and instilling a hope for a free nation.

It was Tilak who began the ritual of immersion of idols into water bodies, which is a practice that is followed till date.   However, as the number of pandals increased, there was rivalry amongst them as to who will lead the immersion process. Eventually, Tilak stepped in and put an end to this rivalry by declaring  that the 5 Manache Ganapathis of Pune will lead the immersion process after which other pandals can take their idols for immersion.

Janwani an organization that conducts heritage walks in the city of Pune, took us to 4 of the 5 Manache Ganapathi pandals across the city.

Kasba Ganapathi is the most revered of the 5 Manache Ganapathis  in the city, as the idol and the temple named thereafter are believed to be the Gramdaivat or presiding deity of Pune.

According to the temple’s website, “In the year 1630 AD, Jijabai Bhosale arrived in Pune with her son Shivaji (who went on to establish the Maratha empire). Young Shivaji, who was only aged 12, was disturbed by the pathetic plight of the mavals (area close to Pune). Shivaji vowed to liberate the mavals from the Mughals. At the same time, an idol of Lord Ganesh was found near the house of Vinayak Thakar, who used to reside close to the residence of the queen, Jijabai Bhosle. Jijabai perceived this as an auspicious moment and built a temple, which is today known as the famous Kasba Ganpati Mandir.”

The Peshwas worshipped Ganapathi with great fervor and Ganesh Chaturthi celebrations in Shaniwar Wada (the home of the Peshwas in Pune) was a grand affair.

Kasba Ganapathi holds a special place in the hearts of the residents of Pune, and even today the first wedding invitation is given as an offering to the temple before distribution to others begins. The form of Ganesha housed in the temple is known as the Jayati Gajanan or the God of Victory. This is the male deity of the city.

To find out more about the Tambadi Jogeshwari Ganapathi click here.

This mandal gets its name from a wrestling pit in its vicinity. The instructor at the pit was fondly referred to as Guruji and hence the Ganapathi came to be known as Guruji Talim. Many mandals in the city like the Guruji Talim have connections with body building and fitness, and so the idols that are installed here are more muscular. It is said that the idol is shown wearing a langot or a loin cloth that is often worn by wrestlers. The idol is adorned by gold ornaments roughly 10 kilos in weight.

Located in a crowded street corner close to the Tulshibaug Ram Mandir, Tulshibaug Ganapathi is one of the biggest Ganapathi idols of the 4 idols that we saw. Around the idol, black and white photos of the different idols over the years since its inception in 1901 are on display. The idol made of fibre glass, is adorned with glittering jewelry that’s said to weigh more than 80 kilos. 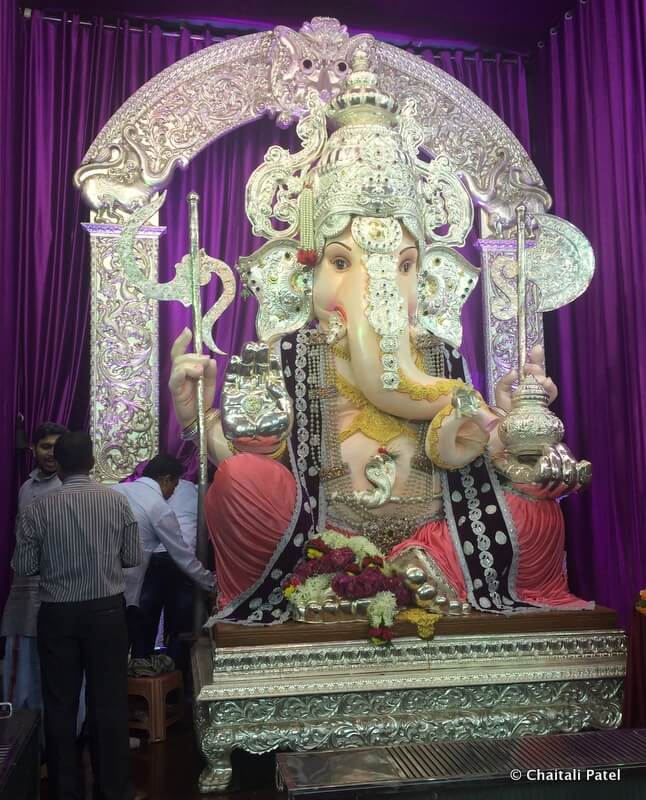 The 5th Ganapathi is that of the Kesariwada Ganapathi or the Ganapathi celebrations that were started by Tilak in 1894. Keeping Tilak’s spirit alive, the mandal organizes various activities that foster unity and provide a platform to individuals to showcase their ideas and creativity. The pandal has a beautiful hand painted panel that shows the life of Tilak as well as a brass statue of the dynamic leader.

Apart from these Ganapathis there are several others throughout the city of Pune. Visiting these Ganapathi pandals requires a lot of walking and you have to brave massive crowds. There is no need to dress in Indian attire, however wear comfortable shoes that are easy to put on and take off.

To find out more about the walks conducted by Janwani, click here.