We turned left off SG Highway past gleaming glass and steel buildings and entered a neighbourhood that seemed to be stuck in time, wedged somewhere between the past and the future. We drove past camel carts ferrying hay, herds of cows and modern houses flanked by under construction office and apartment buildings. Gradually signs of city life started to melt away and village scenes became more evident. Following signboards we found our way to Sarkhej Roza, a piece of architectural marvel in a corner of Ahmedabad.

Sarkhej Roza is a large complex comprising a mosque, tombs, palaces and a man-made lake. The parking is right outside the entrance to the mosque. We had left in a hurry that morning and hadn’t paid any attention or thought to wearing the right attire to enter a place of worship. Not everyone in our group was dressed appropriately to enter the mosque so we decided to walk around and explore the rest of the site. We walked past food stalls that were still closed, and desolate tombs till we reached the walking path running around the periphery of the lake. The view of the large lake, the surrounding boundary wall and the ruins was simply breathtaking. Groups of boys were busy playing a game of cricket in the midst of the now empty lake. I wondered how marvelous it might have looked had it been full of water. 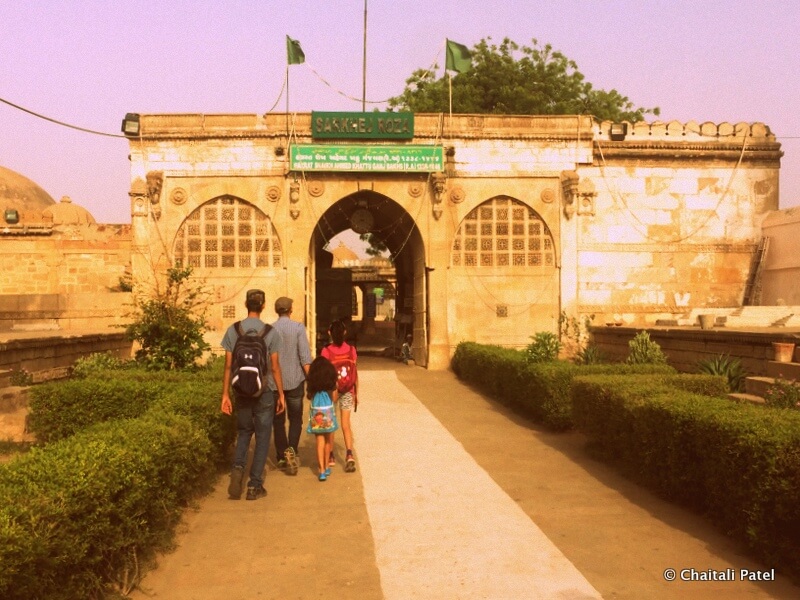 Stepping back in time

In the early 1400s, around the time that the city of Ahmedabad was established, Sarkhej, was a village full of weavers and indigo dyers. Shaikh Ahmed Ganj Khattu, a highly venerated Sufi saint settled in the village and lived here till he died in 1445 AD. His teachings and miraculous powers were well known. After his death, the then ruler, Mohammed Shah decided to build a mausoleum and mosque in the saint’s honour. The two monuments were completed in 1451 AD. In the late 15th century, Sultan Mahmud Begda built the Sarkhej lake, palaces and a mosque for his family. As the years passed, the place rose to occupy a prominent position amongst followers of Sufism. 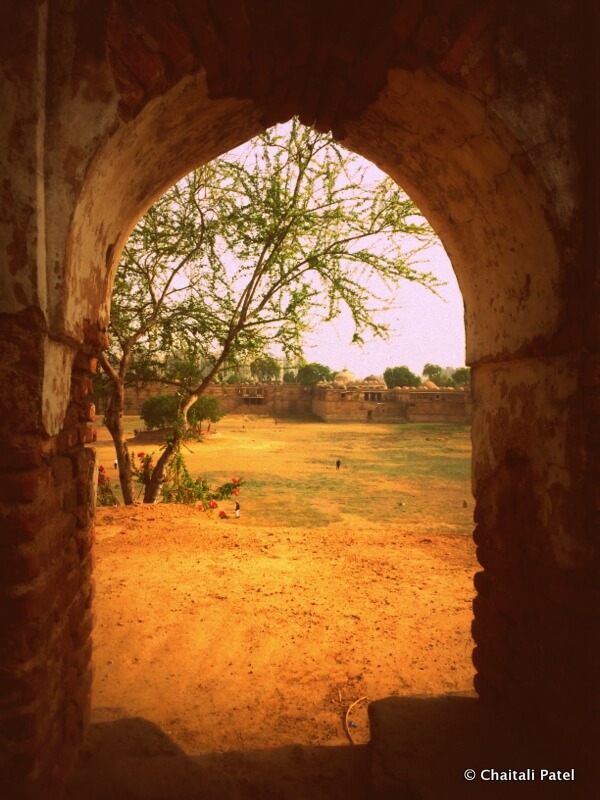 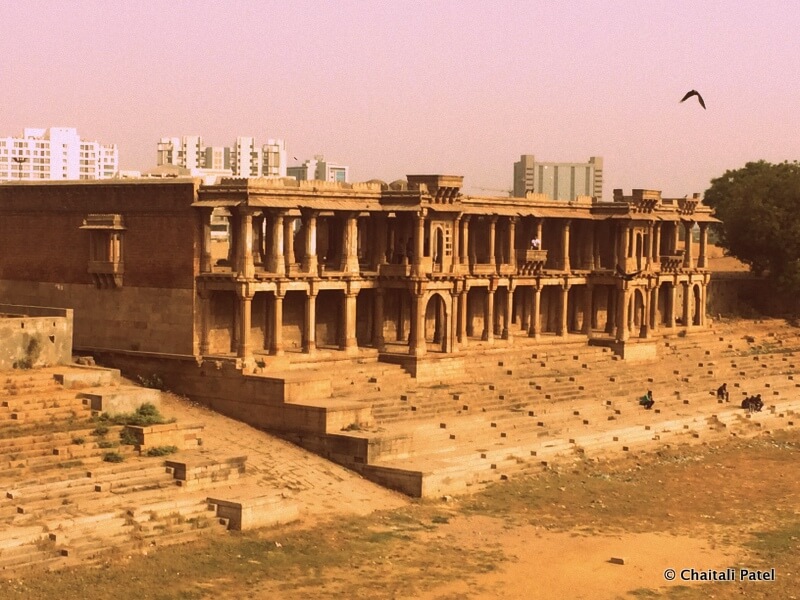 Built in the Indo-Saracenic style, the mosque and surrounding structures are a perfect fusion of Islamic, Hindu and Jain architectural elements. The skeletal remains of the palaces overlooking the lake are simply gorgeous. Now forlorn its not hard to imagine their grandeur in better days. The palace built on the south bank has a passage underneath that takes you the base of the tank. There’s also said to be a tunnel that goes all the way to Memudabad (30 kms away).

We sat for a while soaking in the beauty as groups of youngsters were busy practicing their photography skills in these melancholic surroundings. 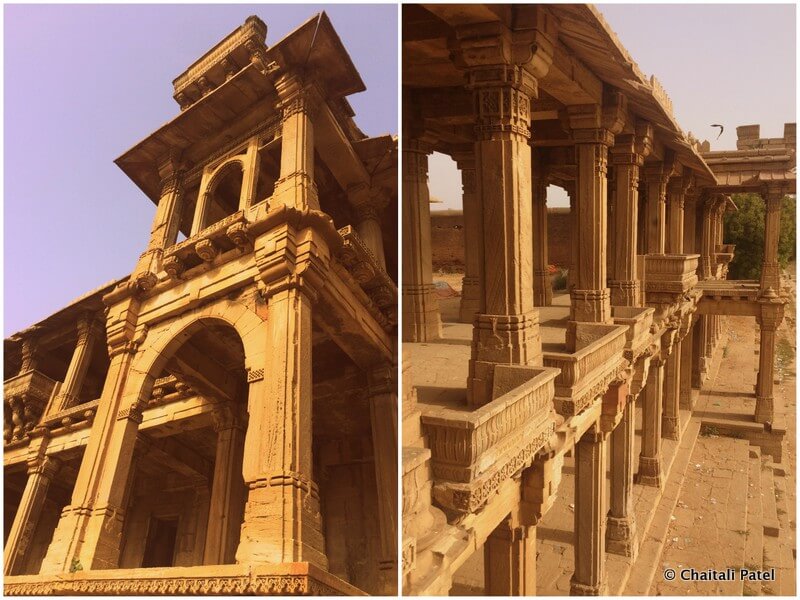 The outside walls of the main mosque occupy one corner of the lake and the structure with its many domes both large and small looked very interesting. I broke away from the group to go take a look inside.

The doorkeeper was kind enough to give me a dupatta (a piece of cloth worn over the shoulders and often used to cover the head) to cover up before I entered the mosque. Unlike the ruins we had just visited, the interiors of the mosque are well maintained. A couple of children were playing hide and seek, as a group of men sat pouring over newspapers and yet another family was having their breakfast. The mosque is an important place of worship and thankfully because of that, it shows no sign of damage.

Mausoleum of the Kings & Queens

To the left of the entrance is a mausoleum with the tombs of Sultan Mehmud Begda, Sultan Muzaffar II and Sultan Mehmud III. Women can enter the building but cannot go into the inner chamber housing the tombs. I just stuck my head in and my nostrils were overpowered with a fragrant smell and a silence descended on me which was truly surreal. I stood there for a while longer just enjoying the peace. 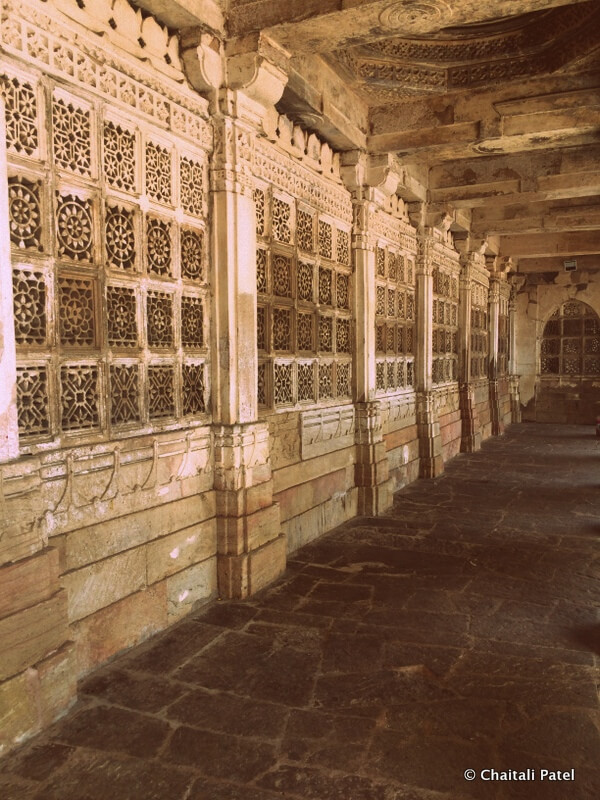 Besides this area past an old well, is the burial chamber of the queens. Beautiful jalli work walls served the purpose of keeping the place well protected from the heat yet ensuring vital ventilation. I walked through an exhibition showcasing the history of the place.

Opposite the tombs of the kings is a shrine built on a raised platform, dedicated to Shaikh Ahmed Ganj Khattu. Said to be one of the largest of its kind in Gujarat, there’s a large central dome surrounded by rows of 13 domes on each side.  Outside the building, occupying the central portion of the open courtyard is a marvelous 16 pillared structured known as Baradari. Its said that the saint would sit here and oversee the initial stages of the building of the Jama Masjid and the excavation of the lake. 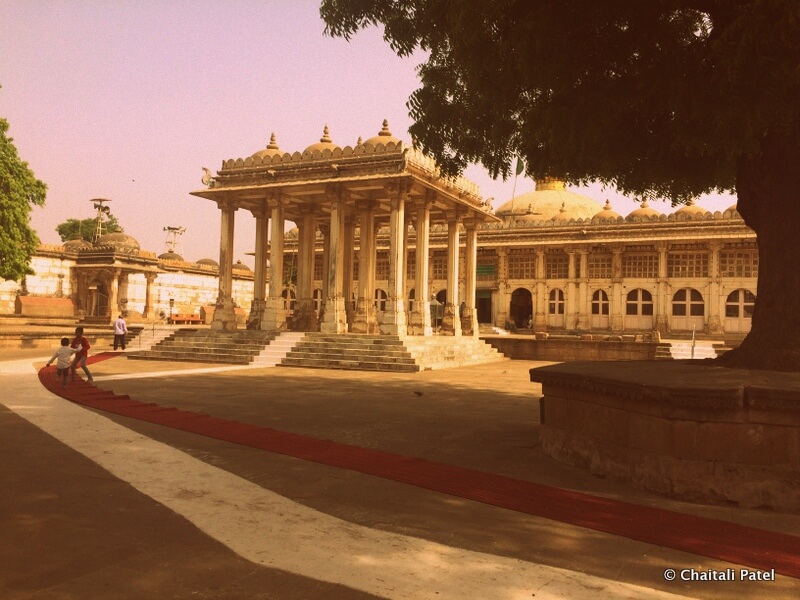 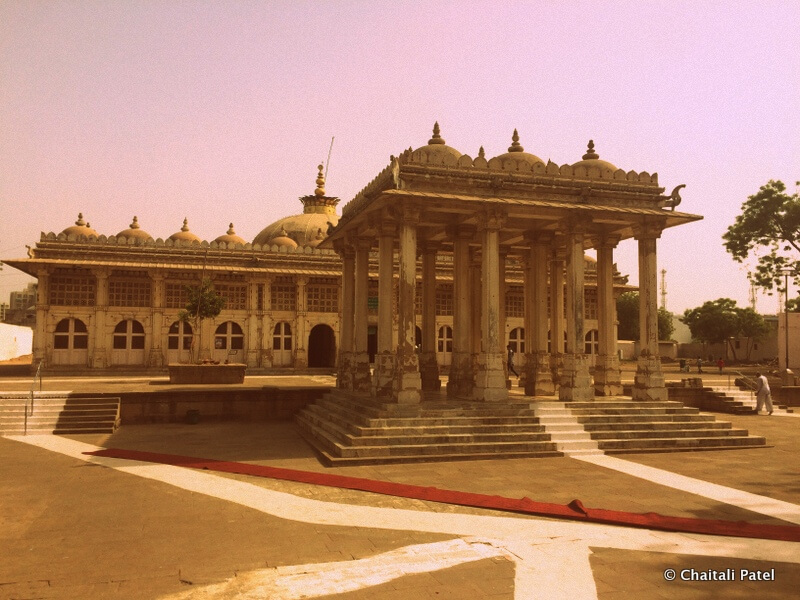 Besides Shaikh Ahmed Ganj Khattu’s tomb is Sarkhej’s own Jama Masjid. Corridors on three sides connect to a fourth side that houses the prayer hall. The structure is simple and beautiful.

I joined the group feeling very satisfied with my visit. We all were in awe of the buildings we had seen that morning, but also really disheartened at their state. The steps going down to the tank are full of litter and in some areas entirely taken over by undergrowth. I believe the site has seen several dignitaries visit and has played host to some interesting festivals. Its easy to imagine how spectacular a venue it can be because of its location and design. I just wish the authorities and we the citizens would take better care of our rich heritage.

Location: Its best to trace your route via Google Maps.

Attire: It can very hot so carry caps. Avoid wearing shorts, sleeveless and dresses if you want to enter the mosque. These rules also apply to children. Wear comfortable walking shoes as there’s a lot of walking to do.

We carried a light breakfast with us, but ensured we left no rubbish behind. There are no dustbins around, so plan to carry all your trash back.