Velas – A Big Step Towards Survival

As the sun gradually rose in the sky that morning, so did the number of people on the beach. Some sat around in little groups, some were busy with their cameras, some were creating more noise than required, but everyone there harboured great expectation – that of seeing the endangered olive ridley turtle. The volunteers from Sahayadri Nisarga Mitra, the local NGO carrying out the consevtaion efforts at Velas were busy with their daily routine. The four upturned baskets lined on one side of the enclosure were the cynosure of all eyes. At 7:30 a.m after one of the volunteers spelt out general rules, the baskets began to be checked. The first basket was empty. The second one was empty too. As the volunteer went to check the third basket, the air was pregnant with hope and prayer. But alas that too was empty. Most people like us, had gone to the beach the previous evening hoping to see hatchlings, only to return having seen empty baskets. But like any good movie the ending of our trip was not going to disappoint and the fourth basket had one, just one little turtle hatchling. 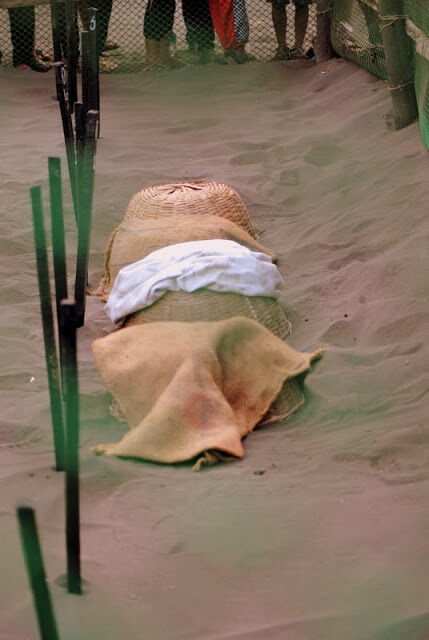 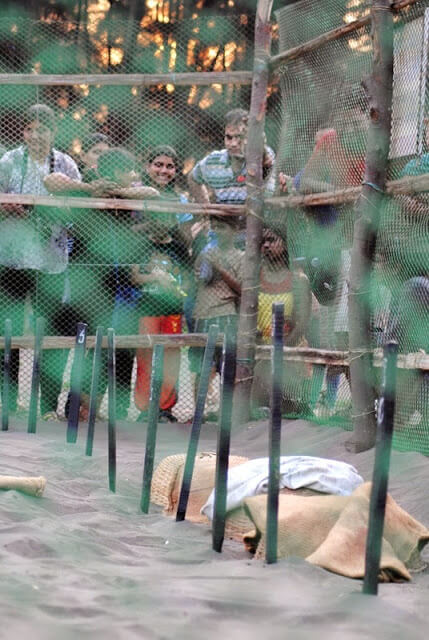 The relevation was not short on drama. A loud Happy Birthday song wlecomed the baby turtle. Suddenly there was a clamour of activity both inside and outside the enclosure. The minute the little turtle was revealed, many of those gathered made a sprint to the shore to take positions for some fantastic shots. At first I thought it was a bit crazy. But later as I scrambled to get a half decent shot of the turtle myself, I realised how smart those early sprinters were!
For those of us who hung around the enclosure, we saw the little turtle get picked up and put into a basket lined with a gunny sack. The volunteers then ran to the shore, eager to set the little one off into the sea. The little turtle had to walk a good twenty to thirty feet into the sea. It was important that the hatchlings walk on that particular beach as by doing that a vital geographical mapping was taking place. Female turtles born on this very beach will return to lay their eggs here. 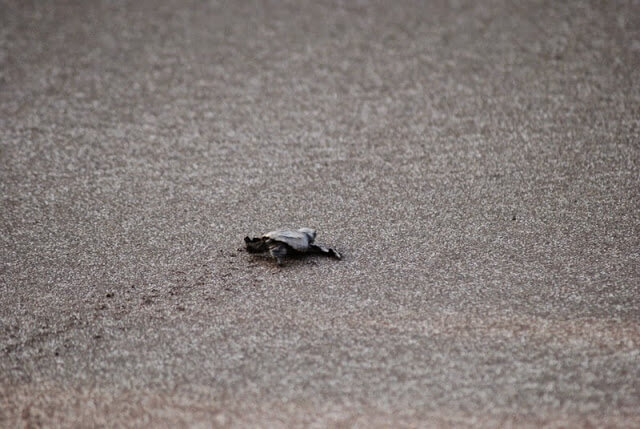 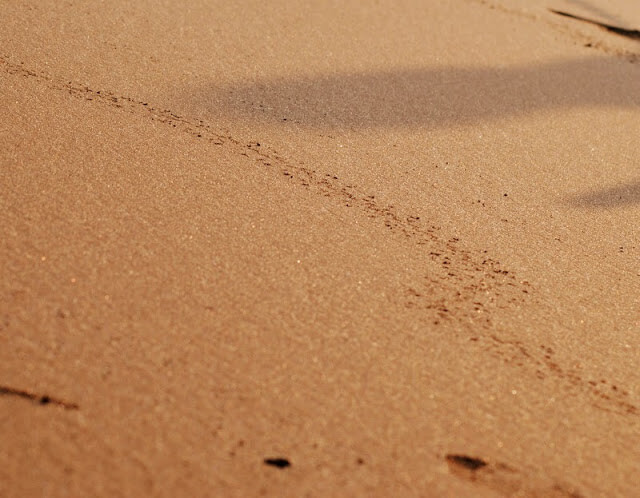 I was amazed at the sheer number of people that had gathered that morning on the beach. Young, old, couples, families, people of all kinds, armed with fancy lenses and cameras of all sorts, watched the spectacle of the little turtle walk to freedom and a new life. Whether that turtle would grow into adulthood was a big question and one that we would never know the answer too? One in a thousand marine turtles grow into adulthood.
Consumption of turtle eggs, slaughter of aduItturtles and destruction of breeding habitats are the main reasons due to which these turtles once found in abundance are an endangered species today. Conservation efforts start from when the nesting season begins in November every year. Villagers and volunteers keep a tight vigil on the female turtles that come to the beach to lay their eggs. The eggs are then collected and taken to a hatchery – typically an area cordoned off on the beach. In the months of March and April, the eggs hatch and the hatchlings are then released safely back to sea. Of the hundred to hundred and twenty eggs that a turtle lays, only about two will hatch.
Turtle conservation efforts in Velas began in the year 2002. Prior to this the eggs were openly sold in the village. By educating the locals about the importance of conserving turtles and by making the conservation effort a income generating one, Sahayadri Nisarga Mitra (SNM) has been successful in accomplishing its mission. Today, Velas alone sees about four hundred tourists in a year during the hatching season, and it is then that almost every house in the village turns into a homestay – welcoming guests for a nominal fee. Of this fee about ten percent goes towards Velas Marine Turtles Conservation Fund.
Years of human greed has caused so much harm to this species, but now if we make a concerted effort, by supporting the NGOs and villages invovled in conservation efforts a small but vital change can be brought about.
8 Comments
By Chaitali