Water bodies, particularly lakes located in high altitudes, nestled by lofty mountains are like a beautiful secret waiting to be revealed. Innumerable movies, photos and postcards showcase their magnificence that only a handful will get to experience in their lifetime.
We were on a short trip to Sikkim and while my heart was set on going North to Gurudongmar, I was travelling with my 72 year old mother so that was not a possibility and we decided to do a day trip to Tsomgo Lake instead.  Located only 38 km from Gangtok, Tsomgo Lake fondly known as Changu by the locals is a journey that most can undertake given its easy accessibility.
It was early May and while the rest of India was reeling under the sweltering heat, the area around Changu was still under thick snow cover, and sharp winds further pushed the temperature downwards. Dressed in layers and all ready to brave the cold, we were about to walk out of our room when the person at the reception called to tell us that Changu was closed that day, owing to a massive landslide along the route because of the incessant rain the previous night. In the mountains you are always at the mercy of the weather gods and they can change all your plans at will.
The next day the roads had opened thanks to the Indian army who worked tirelessly to clear the blockage. Located close to the India – China border, the lake falls under a high security zone and the Indian army has a large presence there.
On days when the route is open, apart from the tourists, many locals also head up there. Some have work in Changu and some go to the villages that lie beyond. When the weather is bad and the roads are closed, these villages are inaccessible sometimes for days.
As we gained altitude leaving the city of Gangtok and the villages around its fringes behind, the presence of the army began to grow and we passed by several well fitted  army camps.  The roads up to Changu aren’t the best and we saw the army painstakingly clear debris from the site of the landslides the previous day.  A large part of the fun of doing a road trip in the mountains is to read the road signs that the Border Roads Organisation put up.  Thought provoking and witty, these signs are like a fun companion when the vegetation fades and the bare mountains rise all around.

Close to Changu, the landscape suddenly changes as snow appears first in pockets and then in large patches, till everything around us turns white. The suddenness of this change is both startling and mind blowing! 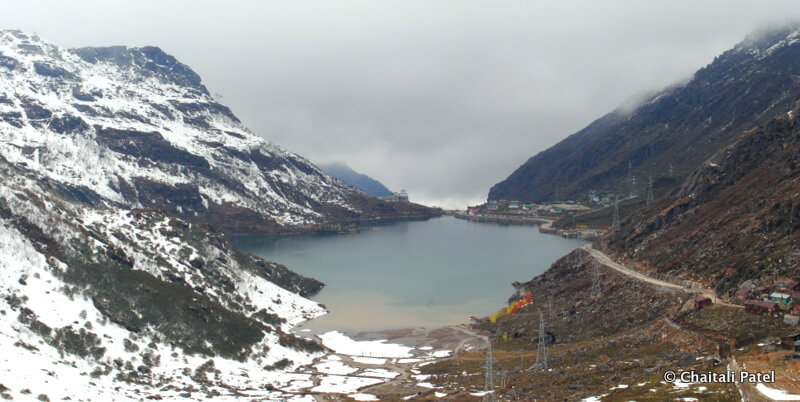 At the fringe of the lake there is a car park and a cluster of stalls selling food and gear that you can hire. Just around the corner from the stalls lay Changu in all her glory. Colourful Tibetan flags fluttered away at the edge of the placid waters as the lake is considered to be sacred by the Buddhists. There is also a small Shiva temple on the banks of the lake. A few men were waiting with the bedecked yaks to take prospective customers on a short ride but besides that we luckily had the lake all to ourselves. 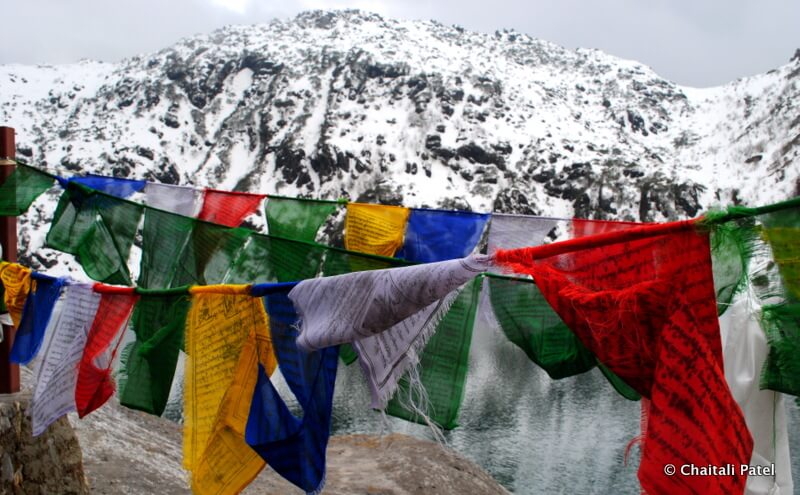 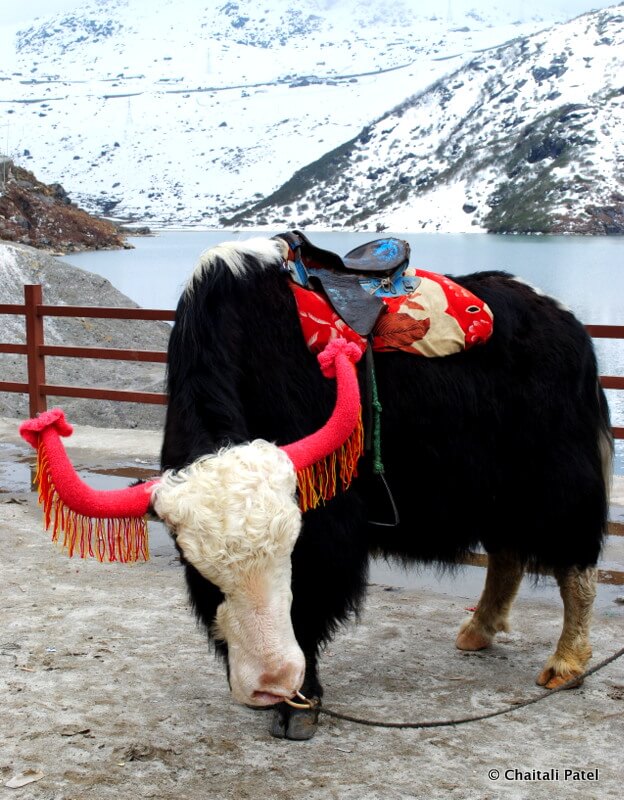 Tsomgo means above the water in the local Bhutia language, and the lake derives water from the melting snow from the surrounding mountains. As we were visiting in early May, snow practically covered every inch of land around us. As the snow begins to melt, it is said that a variety of flowers bloom around the lake.

Most visitors who make the trip up to Changu then go to Nathula Pass and Baba Mandir. The former is a Himalayan Pass that connects Sikkim to China’s Tibet Autonomous Region. Located at 14140 feet above sea level, we gave Nathula a skip as getting a permit for my mother to visit given her age was difficult. We did do the drive up to Baba Mandir and how spectacular it was! 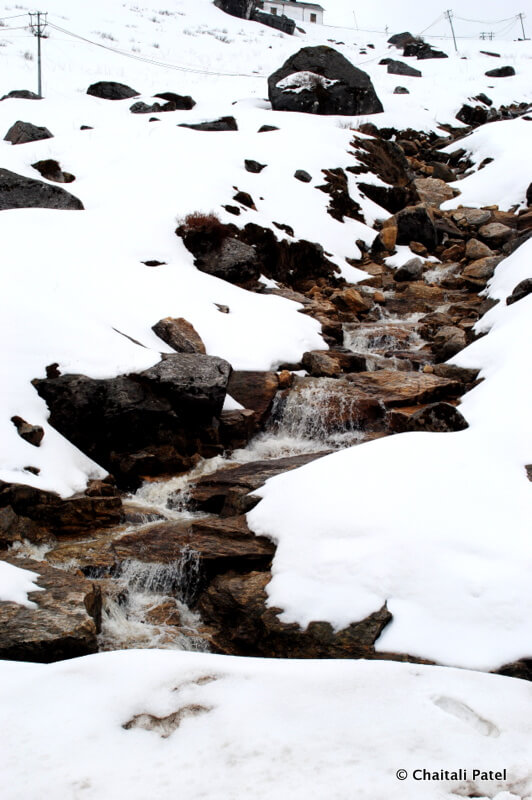 For 17 km the road snaked around slopes carpeted in snow and everything was a pristine white as far as the eye could see. Built in honor of an Indian Army soldier who died in Nathula Pass, Baba Mandir has many interesting stories attached to it. For me, it was the drive getting there and back that was absolutely worth it. 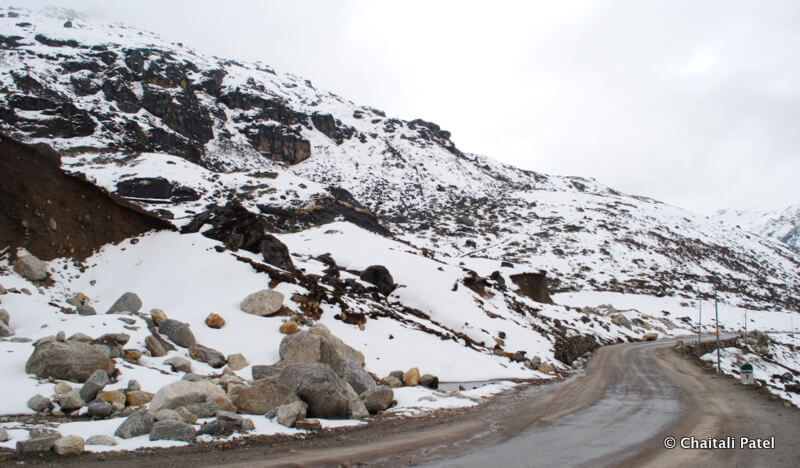 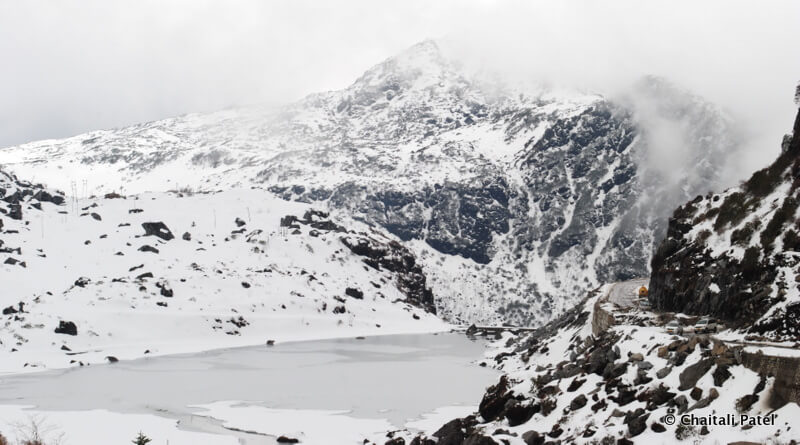 A story about Tsomgo Lake:

The name Tsomgo or Tso Go meaning above the lake was given by the yak herders. The old folktale says that the lake was in a place called Laten in olden times and the place where the lake is today was actually a “Goth” (cattle shed) where the herders kept their yaks. One night an old woman in her dreams was asked to leave the place soon as it would be filled with water. The next morning she warned all the other herders but they refused to believe her. She left the village and as she was leaving she saw a lady with flowing hair, believed to be the guardian deity of the lake and enter the valley and soon the place was filled with water and Tsomgo lake was formed. The herders who had stayed behind perished along with their herds of yak.

– The lake is open to both Indian nationals and visitors from other countries, but the latter have to be in a group of two or more and have to apply for a visitor’s permit through a registered travel agency.

Indian nationals also need a permit which can be easily arranged by your taxi operator or travel agent. Carry photo identification like your Aadhar card or PAN card as well as some passport size photos as these may be required.

– Go adequately covered. The winds drastically reduce the temperature around the lake.

– Hire gum boots / snow boots and gloves from the shops near the lake. These are very useful and by doing so you are supporting local business.

– If you are prone to motion sickness it might be best you take some medicine before your journey as the road to Changu is both winding and bumpy.

– Carry minimal disposable material with you and its best you bring it back and dispose it in the city.