Thy Name is Tranquility 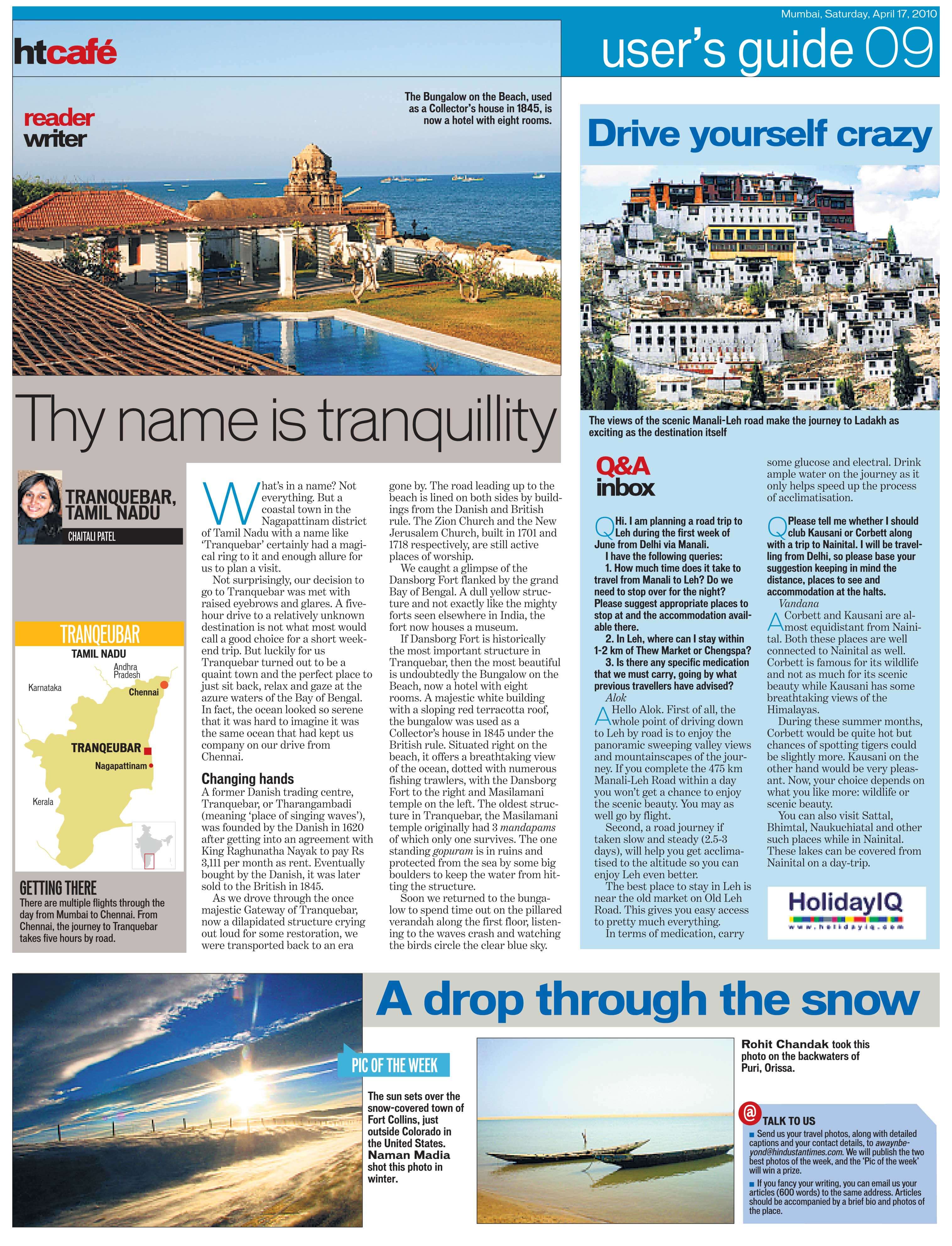 What’s in a name? Well not everything. But a coastal town in the Nagapattinam district of Tamil Nadu with a name like ‘Tranquebar’ certainly had a magical ring to it and enough allure for us to plan a visit.

Not surprisingly, our decision to go to Tranquebar was met with raised eyebrows and strange glares. A five hour drive to a relatively unknown destination is not what most would call a good choice for a short weekend trip. But luckily for us Tranquebar turned out to be a quaint town and the perfect place to just sit back, relax and do absolutely nothing, but gaze at the azure waters of the Bay of Bengal. In fact the ocean looked so beautiful and serene, that it was hard to imagine that it was the same ocean that we had been keeping us company as we drove down from Chennai.

A former Danish trading centre, Tranquebar or Tharangambadi (meaning ‘place of singing waves’) was founded by the Danish in 1620, after getting into an agreement with King Raghunatha Nayak to pay Rs. 3111 per month as rent. Eventually bought by the Danish, it was later sold to the British in 1845.

As we drove through the once majestic Gateway of Tranquebar, now a dilapidated structure crying out loud for some restoration, we were transported back in an instant to an era gone by. The road leading up to the beach is lined on both sides by buildings built during both the Danish and British rule. The Zion Church and the New Jerusalem Church, built in 1701 and 1718 respectively are still active places of worship.

As the road turns left we caught a glimpse of the Dansborg Fort flanked by the grand Bay of Bengal.  A dull yellow structure and not exactly like the mighty forts seen elsewhere in India, the fort now houses a museum.

If Dansborg Fort is historically the most important structure in Tranquebar, then the most beautiful is undoubtedly, the Bungalow on the Beach, now a hotel with 8 rooms. A majestic white building with a slopping red terracotta roof, the bungalow was used as a Collector’s house in 1845 under the British rule.  The charming bungalow situated right on the beach offers breathtaking views of the ocean, dotted with numerous fishing trawlers, with the Dansborg Fort to the right and the mysterious Masillamani temple on the left. The oldest structure still standing in Tranquebar, the Masillmani temple originally had 3 mandapams of which only one survives. The one standing gopuram is in ruins and is barely protected from the sea by some big boulders to keep the water from hitting against the structure.

But nothing could keep us for long from returning to the bungalow, wanting to make the most of the time we had and to spend as many hours out on the pillared verandah that runs all along the first floor of the house, listening to the sounds of the waves crashing and watching the birds circle the clear blue sky.

There are not too many places that I have been to in the recent past that I have left with an almost certain feeling that when and if I do go back at some point in the future, I will see it looking better than when I saw it last. But luckily Tranquebar I believe will be one such place. The efforts being put in by the Danish Government, INTACH and several others towards restoring more jewels of Danish legacy will make Tranquebar only more beautiful if that’s possible.

A slightly edited version of this article was published in HT Cafe on the 17th of April 2010.