Kings and queens, and their royal lives have always fascinated me! A visit to any palace or museum only stoke my interest in their mysterious lives – much admired, envied and discussed. 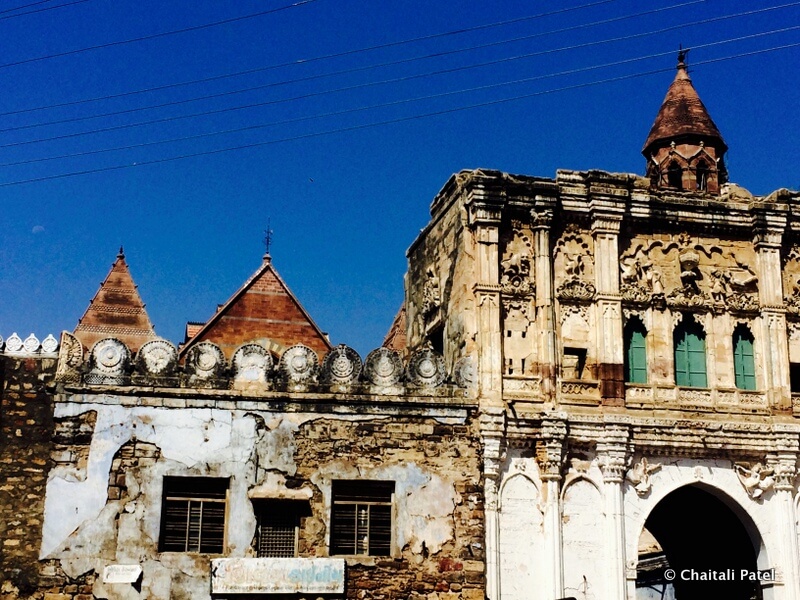 The crumbling entrance to Aina mahal

The Aina Mahal, Bhuj, has to be the most unassuming exterior of a palace that I have seen till date. If not for sign boards, the crumbling, yet jaw dropping Ranivas and the grand Prag Mahal around, Aina Mahal could well have passed of as a coaching centre. As I was buying my entrance ticket a group of elderly people peeped inside and decided against spending 10 rupees per head to enter. After an hour inside, I realized how big a mistake they had made!

The flamboyant heir to the throne of Kutch, Rao Lakhpatji was only 34 when he took control of the court from his father, Maharao Desalji. On his father’s behest, Lakhpatji attended a darbar (court) of Mughal Emperor Muhammad Shah in Delhi. This outing had a tremendous impact on the young royal and on his return from Delhi he commissioned Ramsingh Malam to build Aina Mahal.

Having spent 17 years in Europe, Ramsingh Malam designed Aina Mahal in a Indo European style. Aina Mahal means mirror palace and to meet the huge requirements of mirrors, he set up a glass factory at Mandvi. While most of the material that was needed was sourced locally, chandeliers made of venetian glass were imported from Belgium.

Nagpanchami Ashwari Scroll: Look out for this scroll that is up on the wall right next to the entrance. The 47 foot long scroll depicts the procession of Maharao Sri Pragmalji held annually on nagpanchami (A Hindu festival where snakes and serpents are worshipped on the fifth month of the lunar day of Shravan (July / August)). The procession started from Aina Mahal and ended at the foothills of Bhujia Hill.

The painting was drawn in 1876 by Juma Ebrahim, a Kamagar artist using natural dyes. ‘Kamm’ means work and Kamagar means work produced by an artist. Originally from Delhi, these artists came to Kutch via Sindh, when the Mughal empire began to decline. Skilled in the art of making shields, bows and arrows; they decorated these arms and weaponry with inlay work, and paintings of war and hunting scenes.

Some of the chariots and palkis depicted in the scroll are on display right alongside. 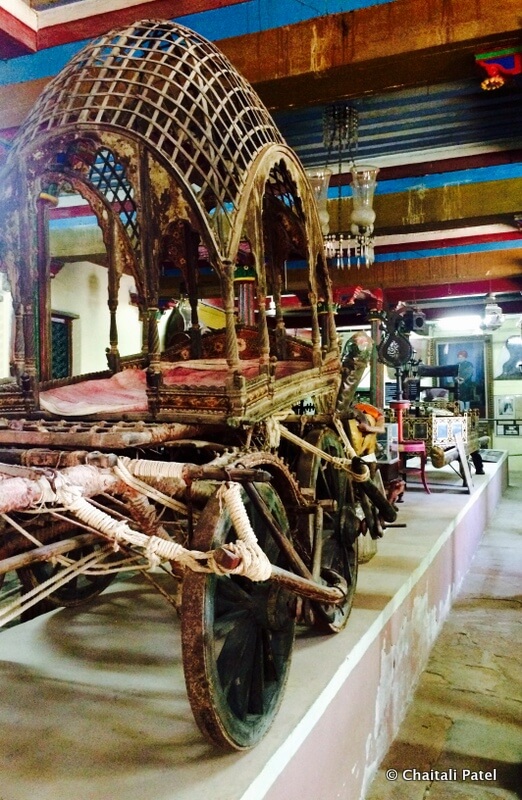 Fuvara Mahal: A patron of the arts, Lakhpatji built a reputation for music and dance while in Delhi. Within Aina Mahal he built the Fuvara Mahal a special place for performances, and the space is a perfect reflection of the fine taste of Lakhpatji. A raised podium that served as a stage is at the center of the room. Built in the days when there was no electricity, the stage is surrounded by mirrors on all sides that reflect the many candles, diyas (oil lamps) and chandeliers that were lit up on the night of a performance. To ensure the room stays cool, the ceiling was raised and a wooden grill added at the top so that there was adequate ventilation at all times. 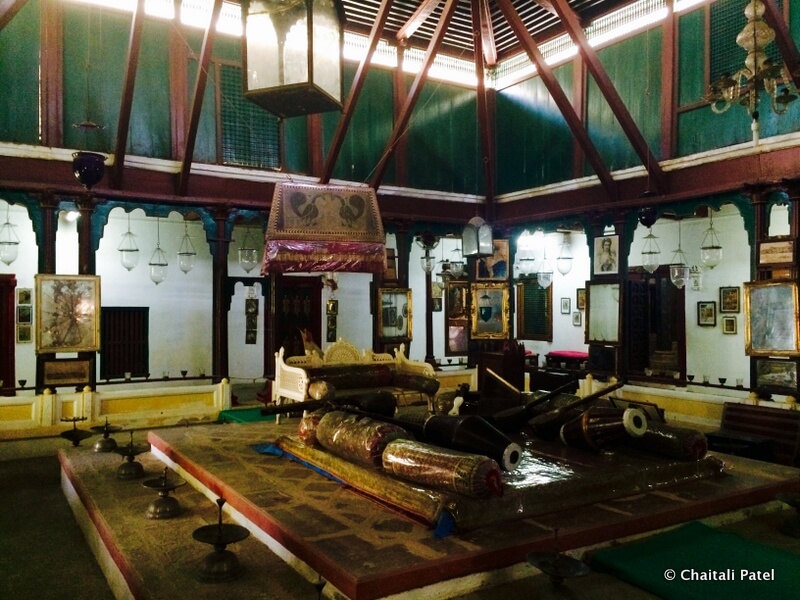 
As I stood there listening to S M Vaishnav, the curator of the museum take me through the details of the design, I couldn’t help but wonder how captivating a space it must have been to watch a performance.

Aina Mahal: The space that gives the palace its name, is nothing short of spectacular. The floor is covered with striking blue tiles with a floral motif. The pillars are all adorned with pieces of mirror. But the highlight is the ceiling, every inch of which is covered with gold flowers and mirrors. Family memorabilia, china, coins, weapons, glass paintings and photographs are on display. 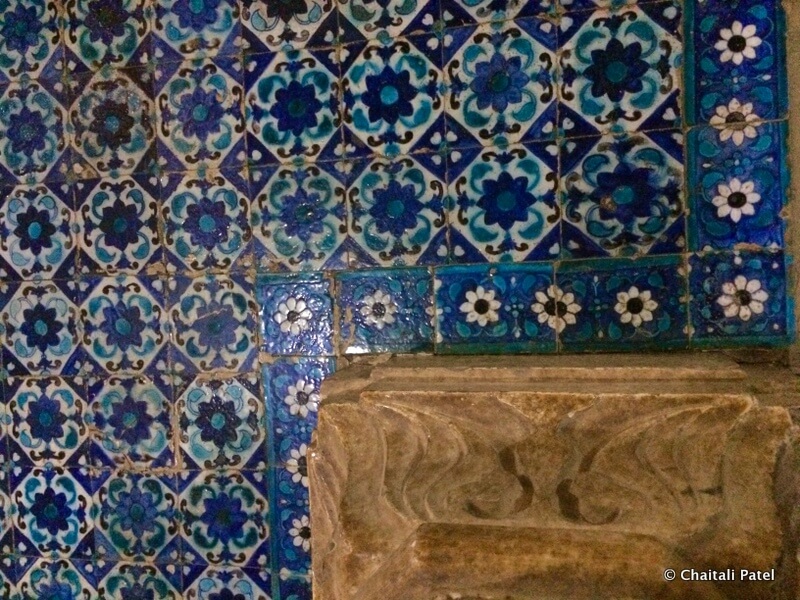 Gorgeous blue tiles on the floor 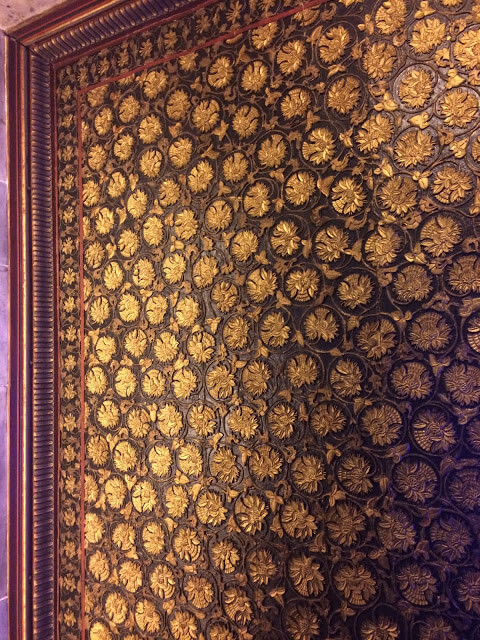 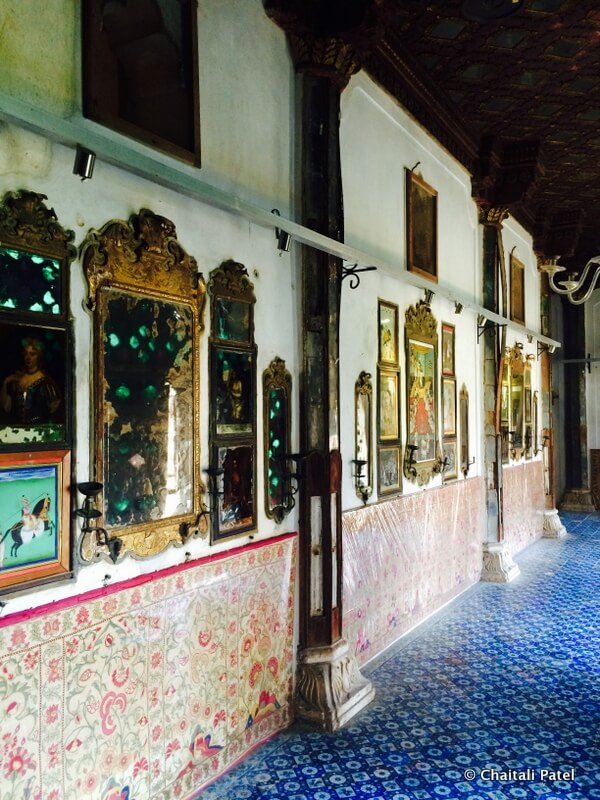 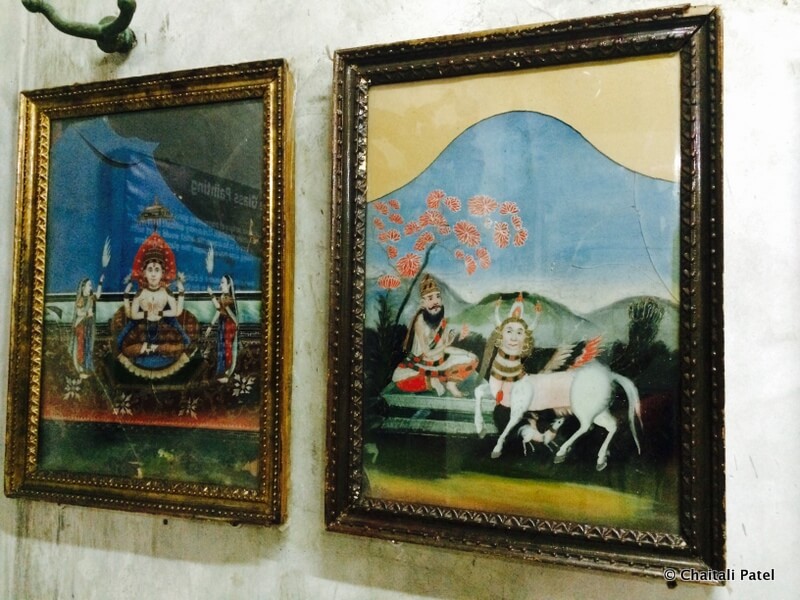 
Doorways lead to rooms, many of which are shut, but the doorways itself are a work of art to behold. The most famous door being one inlaid with ivory. Handcrafted during the rule of Maharao Godji II, the is a fine example of the skill of Kutchi craftsmen in inlay work and carving.

Hira Mahal: What Hira Mahal lacks in size, it makes up in grandeur. The King’s private bedroom is opulent and intimate. Twenty seven Roccoco style carved gold mirrors hang on walls covered with panels of semi precious stone inlaid into marble. A single source of light was all it took to light up this room. The King’s bed with 4 legs made of solid gold is on display. It is said that every year a new bed was made and the old one was sold off in an auction amongst the elite of the city who would vie to sleep on a King’s bed. 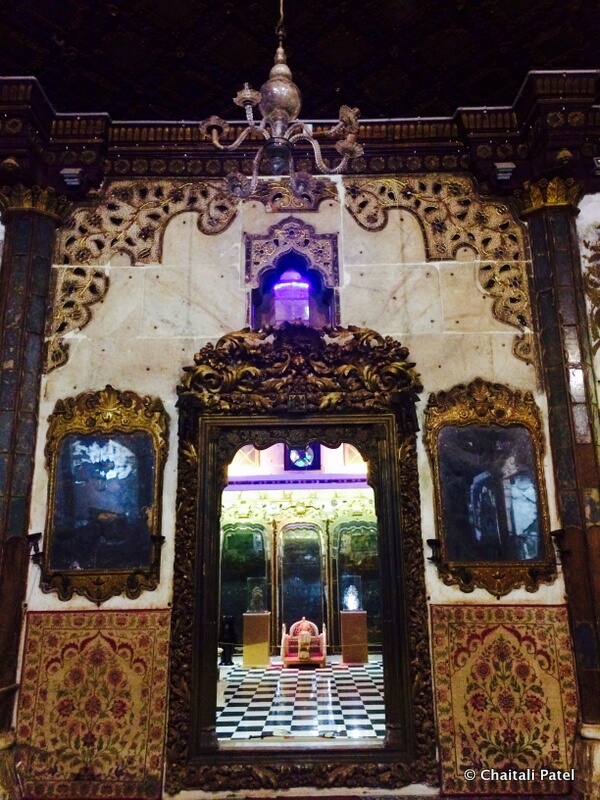 
Also on display in the room is a diamond studded sword and shield, presented by Mughal Emperor Alamgir II in the 18th century, as well as a pair of slippers that spray perfume every time the knob on the heel gets pressed.

Sigh the lives of royalty! What we see today is only a fraction of what their lives must have been like hundreds of years back.

Do the lives of Kings and Queens fascinate you?