Areas surrounding airports and railway stations are seldom the most memorable or pleasant. Bagdogra though was a complete surprise! No sooner had we left the airport and we were surrounded by tea gardens! Soon enough we entered town and things dramatically changed.
As our taxi set forth on the road to Gangtok, within minutes of leaving the town areas, gorgeous green groves enveloped us on both sides. The Indian Army has a sizable presence in both West Bengal and Sikkim and we drove past many Army establishments, including a recruitment office.
A little bit further we caught up with the Teesta that looked like a small river this side of the dam. Once we had crossed the dam, the river swelled and like everything else around us, accept for the sky was a deep green. For most part of the drive the river kept us company, almost always in view. 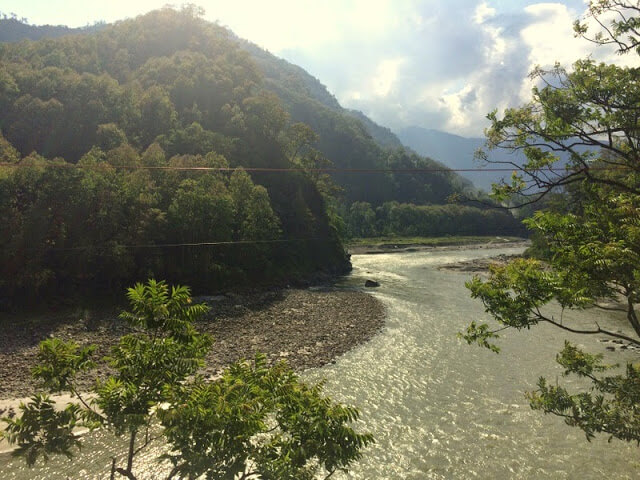 The roads right up to Gangtok were good and there was hardly any traffic as the day we arrived a bandh (a state declared closure of all commerce often carried out as a protest) had been declared in West Bengal. The hills were verdant reminding me of how Maharashtra looks after the monsoons. We crossed several big bridges and went past one that looked straight out of a classic English movie, called the Coronation bridge, also known as the Sevoke bridge. Completed in 1941, the bridge was thus named to commemorate the coronation of King George VI and Queen Elizabeth in 1937.
The drive was spectacular and the views were splendid. Coming from Bombay we were lapping up the cool weather. 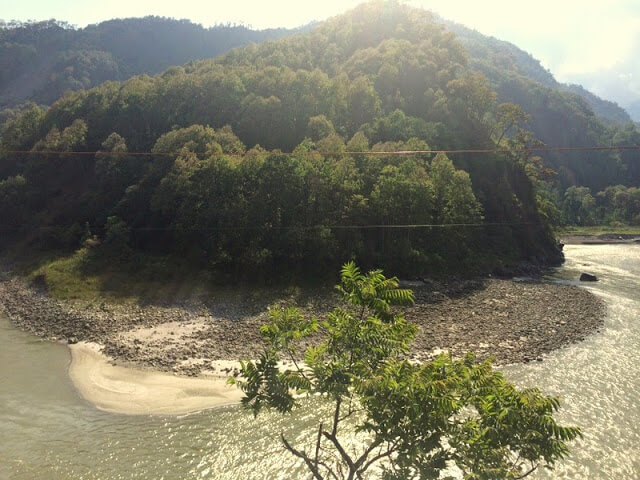 Every now and then a few houses would appear, perched on the side of the hill hanging precariously above the river. Some of these had little shops attached to them or if not the shops were situated close by. I was intrigued by these houses, I wondered what life might be like for these people, where their children went to school! 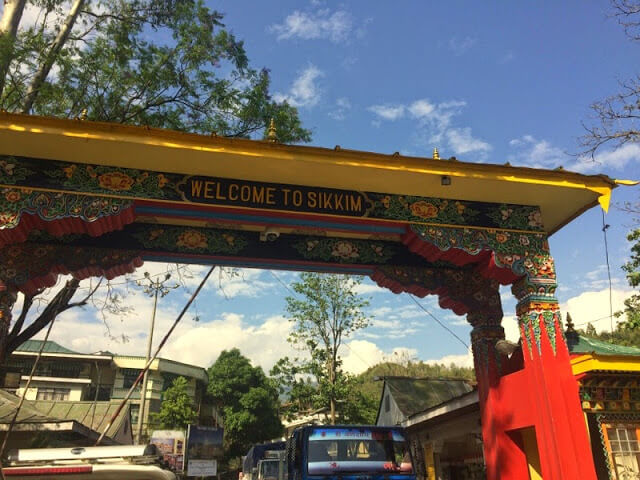 As we gradually climbed the vegetation began to change. And almost out of nowhere, we crossed a metal bridge that had a sign “Welcome to Sikkim” and as we got of it the Sikkim border check post welcomed us. Our driver made the requisite entry formalities and we drove ahead. We drove through the towns of Rangpo and Singtam. People began to look different slowly. India is truly an amazing country and its fascinating to notice how physical appearances, language, food, clothes and so many other little things begin to change as you travel from one state to the other, some subtle and some more conspicuous.
As we start our climb towards Gangtok, the Teesta gradually leaves us until she’s completely out of view. The first thing that catches our attention of Gangtok is the dedicated walking path that runs pretty much across the entire city. With green railings on two sides, the walkway is a great convenience for locals who walk a lot in the city.
The roads are narrow and often we stood in long snaking lines waiting to move ahead. Unlike most other Indian cities people here don’t honk a lot, which really was a welcome change.
The sun had started its downward descent, the temperature began to drop and our sense of excitement had begun to rise. This was one of my most impulsive trips and least planned as well. I just wanted to get there, take it all in and do what I felt like and do what I could! And considering this was my first visit to the North East, it was undoubtedly going to be special. Do you feel a nervous sense of excitement when you go to a new place?
10 Comments
By Chaitali