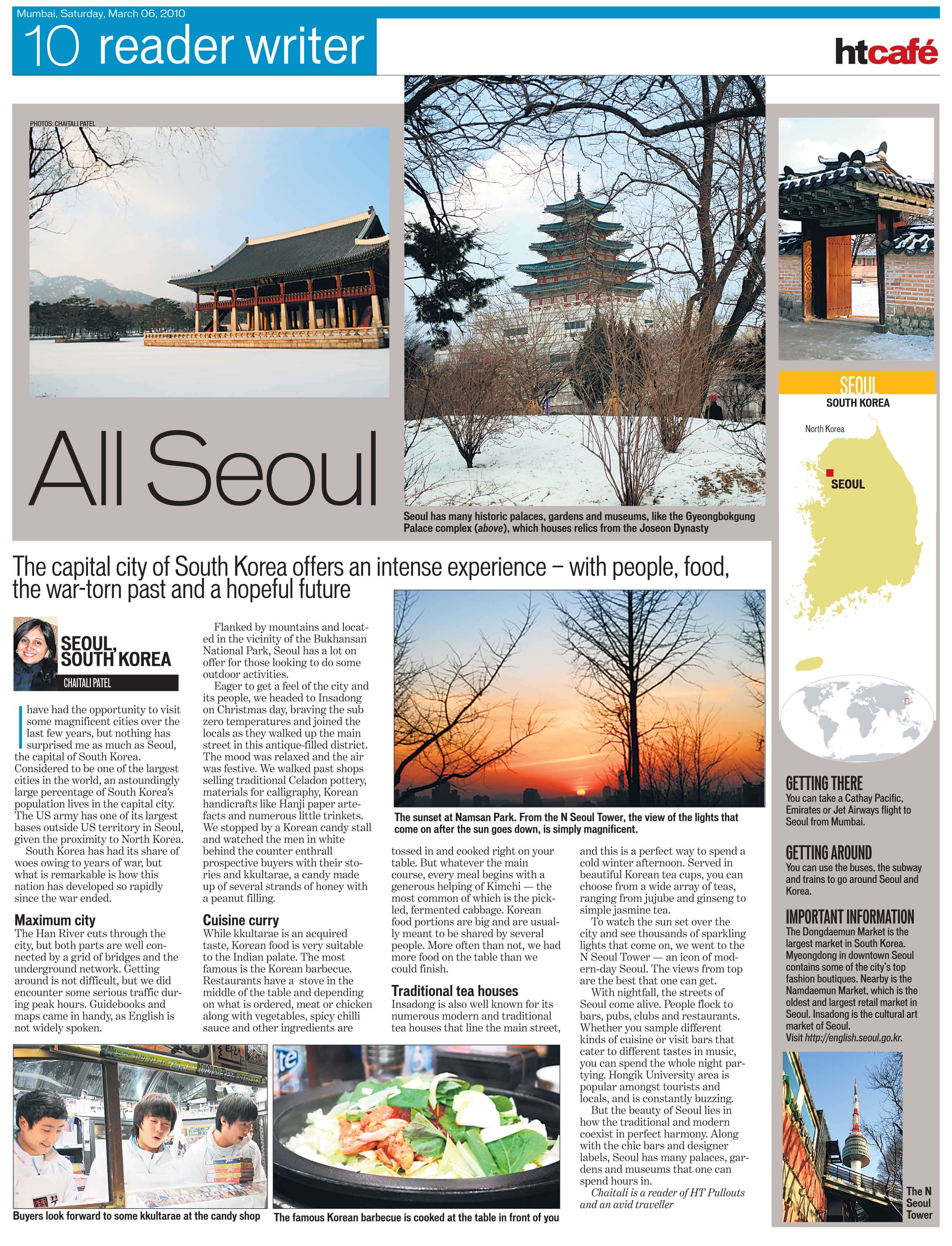 I have had the opportunity to visit some magnificent cities over the last few years, but nothing has surprised me as much as Seoul, the capital of South Korea. I had always imagined Seoul to be a big city, well developed, with a lot of neon lights and buzzing traffic, but the city turned out to be all this and more.

Considered to be one of the largest cities in the world, an astoundingly large percentage of South Korea’s population lives in the capital city. The US army, also, has one of its largest bases outside US territory in Seoul, given the proximity to North Korea.

South Korea has had its share of woes owing to years of war, but what is remarkable is how this nation has developed so rapidly since the war ended.

But undoubtedly Seoul (pronounced “soul”) is the soul of South Korea. Whether it’s shopping, getting a peek into Korean culture, exploring Korean cuisine, collecting Korean artifacts or just unwinding into the wee hours of the morning like the Koreans do, Seoul is the perfect place to do all this.

The Han River runs through the city dividing it into two parts. However, both parts of the city are well connected by a grid of bridges and the underground network. Getting anywhere in the city is not difficult, but we did encounter some serious traffic during peak hours and thankfully had our guidebooks and maps handy, as English is not widely spoken.

Flanked by mountains and located in the vicinity of the Bukhansan National Park, Seoul has a lot on offer for those looking to do some outdoor activities. But the city itself has enough to engage a traveler for several days.

Eager to get a feel of the city and its people, we headed to Insadong on Christmas day, braving the negative temperatures and joined the locals as they walked up and down the main street in this art and antique district. The mood was relaxed and the air was festive. We walked past shops selling traditional Celadon pottery, materials for Calligraphy, Korean handicrafts like Hanji paper artifacts and numerous little trinkets. We stopped by a Kkultarae or a Korean candy stall and watched the men in white behind the counter enthrall prospective buyers with their stories. Kkultarae, is a candy that is made up of several hundreds of fine strands of honey with a peanut filling.

While Kkultarae is an acquired taste, Korean food is very suitable to the Indian palate. The most widely known and eaten the world over is the Korean barbeque. Korean barbeque restaurants have a  stove in the middle of the table and depending on what is ordered, meat or chicken along with vegetables, spicy chilli sauce and other ingredients is tossed in and cooked right on your table. Ice cold buck wheat noodle broth, pajeon or green onion pancake, bibimbap – a dish made with rice, vegetables, chilli sauce and beef or seafood are other local favourites. But whatever the main course, every meal begins with a generous helping of Kimchi – the most common of which is the pickled fermented cabbage.

Korean food portions are big and are usually meant to be shared by several people. More often than not we had more food on the table than we could finish.

Insadong is also well known for its numerous modern and traditional tea houses that line the main street, and this is a perfect way to spend a cold winter afternoon. Served in beautiful Korean tea cups, you can choose from a wide array of teas such as jujube to ginseng to simple jasmine tea.

To watch the sunset over the city and to take in the thousands of sparkling lights that come on as the sun goes down, we headed to Namsan Park and N Seoul Tower. Built in 1969 the tower was opened to the public in 1980, and is an iconic symbol of modern day Seoul. The views from top are some of the best that one can get.

But a visit to Seoul would be incomplete without experiencing the city after dark. With nightfall, the streets of Seoul come alive. Young people flock to the numerous bars, pubs, clubs and restaurants to unwind after a hard day’s work. From different kinds of cuisine to bars that cater to different tastes in music, one can easily spend the whole night partying. Hongik University area is popular amongst tourists and locals, and as most university areas, it has a buzz that’s hard to miss.

But the beauty of Seoul lies in how the traditional and modern coexist in perfect harmony. Along with the chic bars, cafes and designer labels, Seoul has many palaces, gardens and museums that one can spend hours in. The War Memorial of Korea bears testament to the years of war that the nation has grappled with, and houses a large collection of fighter jets, tanks and other ammunition.

But if you are traveling with children or just want to have some fun, like we did, head to Lotte World. Located in the Jamsil district of Seoul, Lotte World is a recreation complex that consists of an indoor and outdoor amusement park, a museum, shopping mall, a movie theatre and an indoor ice skating rink.

If it is shopping you are looking for, there’s a lot of choice on offer. You can pick up hard to distinguish fakes from Itaewon, a locality popular with expats living in Seoul or shop for the original labels at Myeongdong, Gangnam or the very fashionable and hip, Apgujeong area.

We ended our trip with a visit to Nanta Theatre – the much acclaimed Korean theatre performance played out on a set modeled after a kitchen. The show is a fantastic mix of acrobatics, percussion and comedy and had us roaring with laughter.

Even though it was freezing cold, the city and its people warmed our hearts. We bid adieu to Seoul surprised, satisfied and still craving for more.

A slightly edited version of this article was published in HT Cafe on the 6th of March 2010.