As I am still reeling under my Colaba hangover, I thought its best if I write about some of the many fantastic buildings that are found that side of town. The surroundings may not be the prettiest but these buildings are in the thick of action and many of them continue to be used on a daily basis. While this causes a lot of wear and tear, it also makes these buildings very relevant. Hopefully their use if not their historical significance will ensure that enough funds get allocated for their upkeep and maintenance.
Asiatic Society of Mumbai 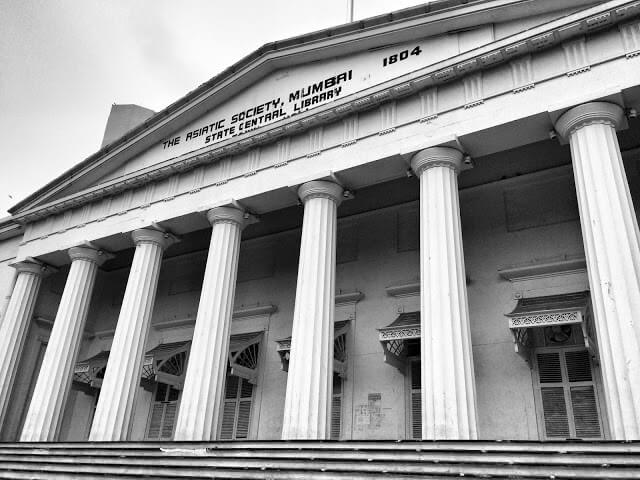 While this iconic library that houses over 25000 rare books, manuscripts, coins and scrolls should be known for its literary value, Bollywood has put it in the spotlight, with a number of famous scenes and songs having been filmed on the steps leading up to the building. Built in 1804 by Sir James Mackintosh this is one of Mumbai’s oldest public libraries. In good weather its fun to sit on the steps facing Horniman Circle and just watch the world go by.
David Sassoon Library 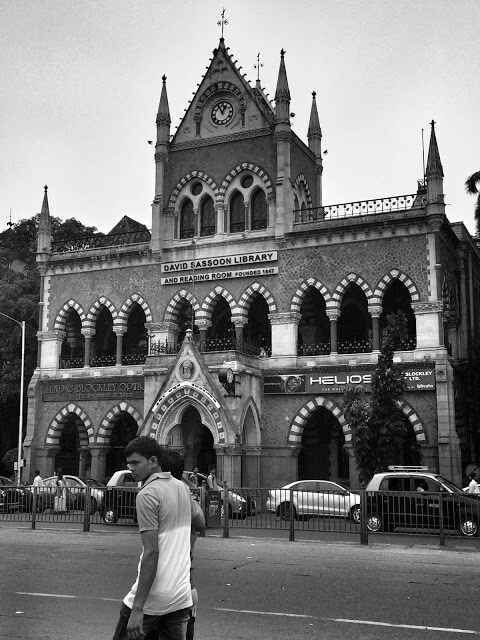 One amongst the 145 protected monuments in Mumbai, what catches my eye every time I pass by this building are the people sitting on the first floor verandah reading or chatting as if completely oblivious to the world outside. A building with Gothic architecture, the library houses over 40000 books. 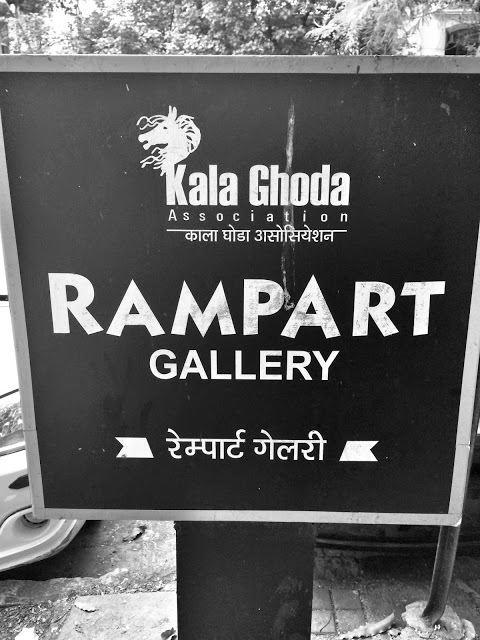 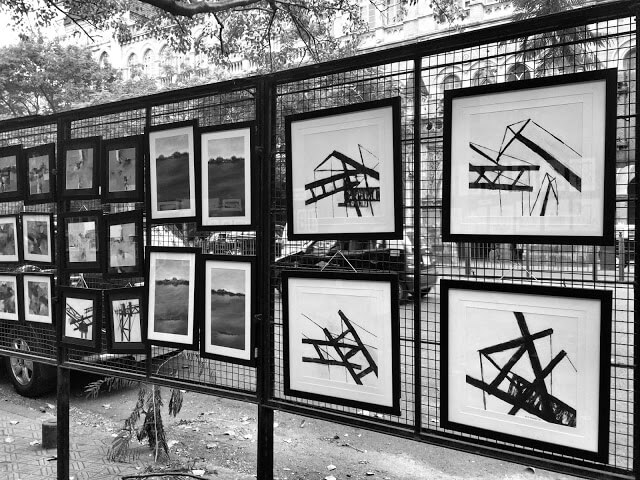 Right across from the David Sassoon Library is Kala Ghoda, Mumbai’s art street or corner. While Jehangir Art Gallery stands on one side, there are a number of small galleries that occupy tiny spaces from the many lanes that branch off from Kala Ghoda. The yearly Kala Ghoda festival is the country’s largest multicultural festival where many artistes, performers and craftsman gather. The streets also give many upcoming artists to display their works of art.
And here’s why its called Kala Ghoda: The name Kala Ghoda means Black Horse, a reference to the presence of a black stone statue of King Edward VII (as the then Prince of Wales) mounted on a horse that was built by Jewish businessman and philanthropist Albert Abdullah David Sassoon, although this statue was removed from the precinct in 1965 and subsequently placed inside the Byculla Zoo. * 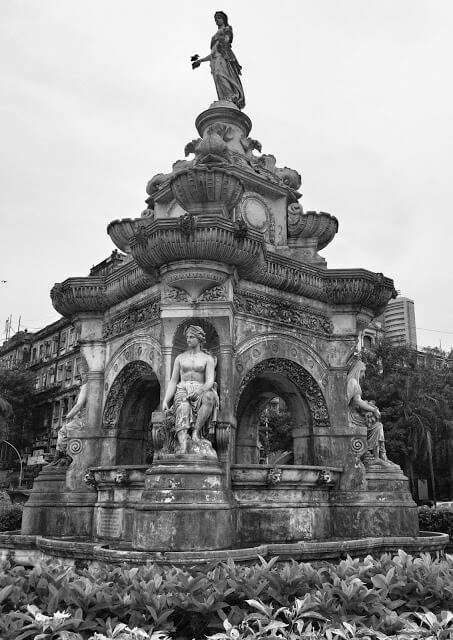 Located in the Fort area of Mumbai, the fountain today is a hub of activity. Built in 1864, the fountain is a representation of Goddess of flowers – Flora, and hence the name.
Here’s a bit about the history of the monument: The Flora Fountain was initially named after the Governor of Bombay, Sir Bartle Frere, but just before the fountain’s inauguration in 1864, the name ‘Flora’ was bestowed on it. The Flora Fountain is erected in the same place where the original Churchgate of Bombay Fort once stood. The fountain was later known as ‘Martyr’s Square’ of ‘Hutatma Chowk’ in 1960, to honor the 105 members of the ‘Samyuktha Maharashtra Samiti’, who lost their lives while fighting for a separate Maharashtrian state.**
Gateway of India 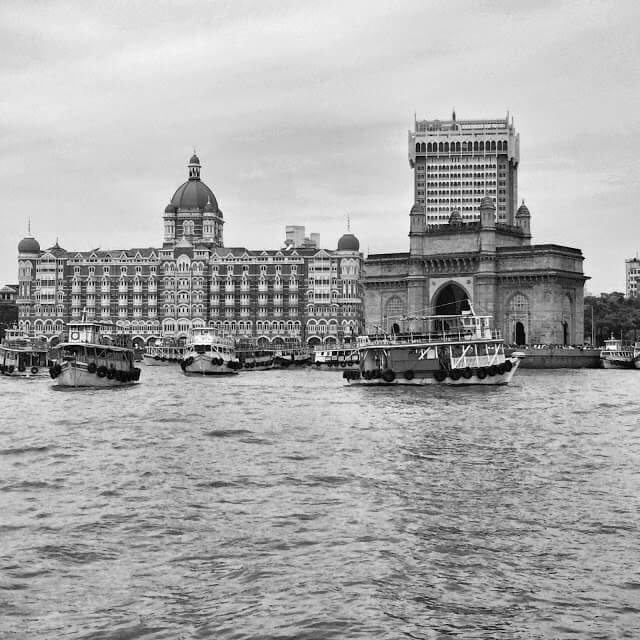 Possibly Mumbai’s most iconic landmark, the Gateway built during the British Raj (Rule) stands on the waterfront area of Apollo Bunder besides the infamous Taj Mahal Palace Hotel. The structure was commissioned to commemorate the visit of King George V and Queen Mary to Mumbai in December 1911. However, all they got to see was a cardboard model of the structure. The then Governor of Bombay – Sir George Sydenham Clarke had laid the foundation stone on 13th March 1911, but construction only began in 1915 and the structure was completed in 1924. After India’s independence, the last British troops passed through the Gateway in a ceremony on the 28th of February 1948, signifying the end of the Raj.
Today the Gateway is the most visited area of Mumbai, with thousands of visitors flocking the structure. Chaos and mayhem are part and parcel of the Gateway experience, but neither take away from the structure’s aura and beauty. Taking a ferry ride from behind the Gateway gives you a chance to see the monument sans the crowds, flanked by the Taj Mahal Palace Hotel.
Taj Mahal Palace Hotel

Built 21 years before the Gateway of India, the hotel has hosted some of maharajahs (Kings), world’s most prominent dignitaries including political leaders, sports people, business tycoons and stars. Its widely believed that Jamsedji Tata built the hotel after he was refused entry into one of the city’s most prominent hotels of the time – the Watson’s Hotel, which was restricted only to the Whites.
Do you have any special memories associated with these monuments?
***
*Source: Wikipedia
**Source: www.mumbai.org.uk/flora-fountain.html
4 Comments
By Chaitali