Batu Caves is one of the most popular Hindu shrines to be found outside India, and draws several thousand visitors a year, with the numbers rising during the annual Thaipusam festival that just finished a few days back. Located about 13 kms from Kuala Lumpur in the Selangor district of Malaysia, the limestone caves were discovered by an American naturalist, William Hornaby in 1878. It was a powerful and well known Indian trader – K Thamboosamy Pillai, who convinced the British authorities to set up a Hindu shrine within the caves, and thus Batu Caves was born.

Wikipedia says, ‘Batu Caves in short also referred as 10th Caves or Hill for Lord Muruga as there are 6 important holy shrines in India and 4 more in Malaysia. The 3 others in Malaysia are Kallumalai Temple in Ipoh, Tanneermalai Temple in Penang and Sannasimalai Temple in Melacca.’ 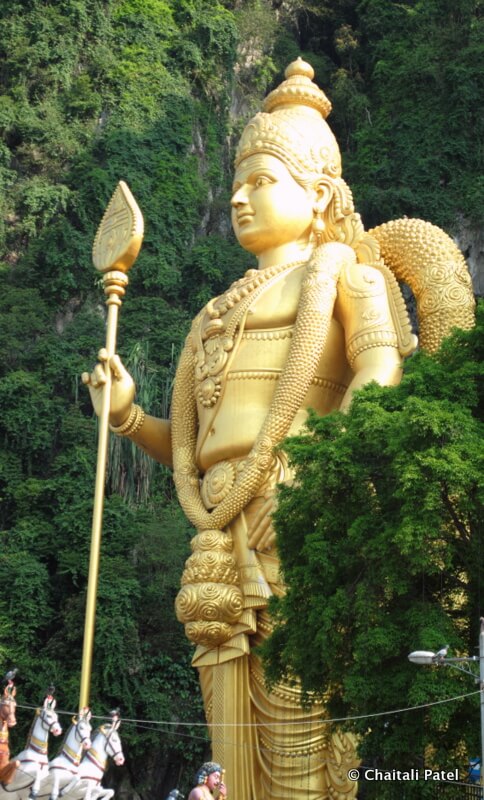 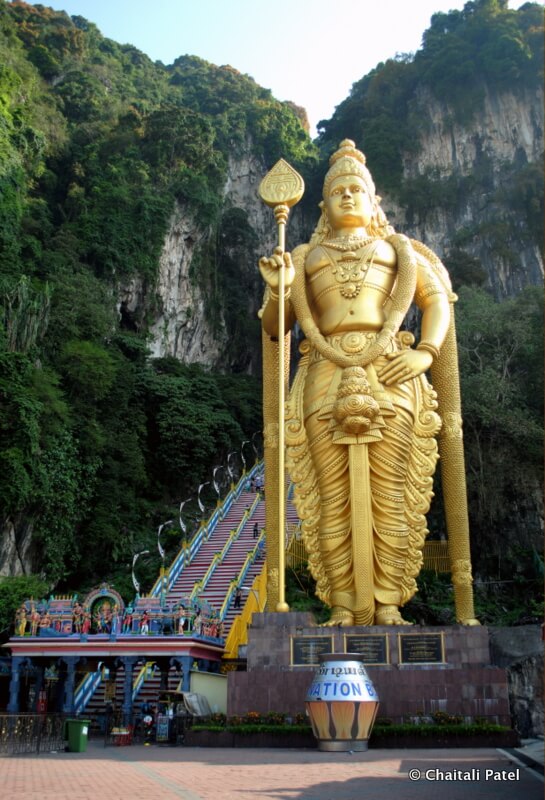 Having lived all my life in Tamil Nadu, visiting Batu Caves for me was a very interesting experience. As I stood at the foot of the soaring 42.7 meter golden Murugan statue that greets visitors to the caves, I felt as if I was back in Tamil Nadu. Women sat at their poo kadais (flower shops) selling malais (garlands) made of fragrant jasmine and roses. While nearby priests clad in the traditional veshti (a dhoti or cloth that covers the lower part of the body) were offering prayers and distributing prasad (flowers, fruits, often something to eat, that has been blessed) in the temples around the stairs that led up to the caves. Almost all the locals were chatting away in Tamil. All my senses were taking me back home but my mind was telling me firmly that I was indeed in Malaysia, far away from India. 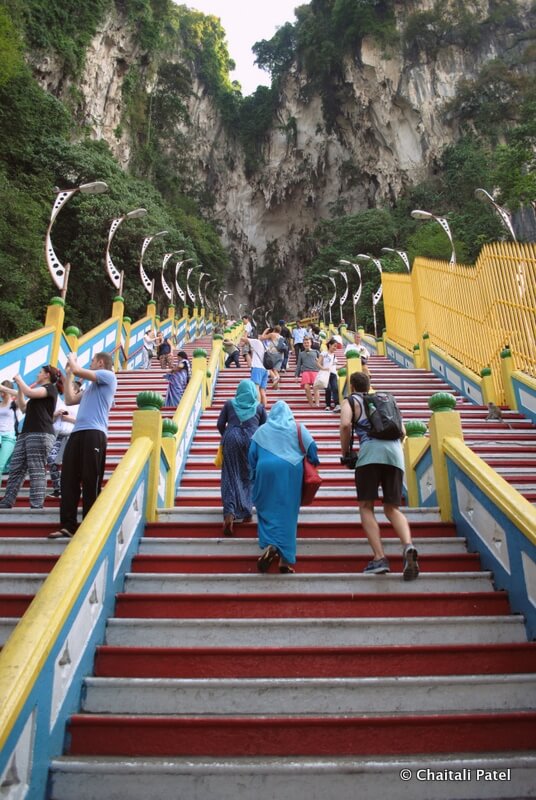 Lost in my reverie, I started to climb the 272 steps that led to the main shrine located inside the caves, when all of a sudden a lady started shrieking while her husband was trying to shoo away a snarling monkey. But too late, the monkey had managed to pry away the lady’s handbag and make way with it. As the couple with help from the crowd tried to get the handbag back by showing aggression, the monkey seemed to get bolder, jumping swiftly to a higher ground. Once it had found a comfortable spot, the monkey started its show. It carefully opened her bag and started taking things out of it, examining its loot one object at a time, before discarding it with such aplomb, adding much to the poor lady’s trauma. 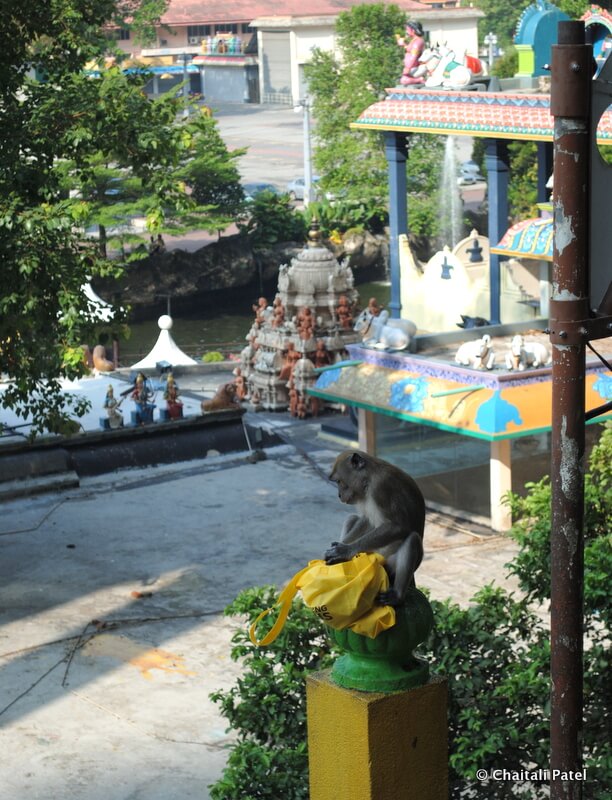 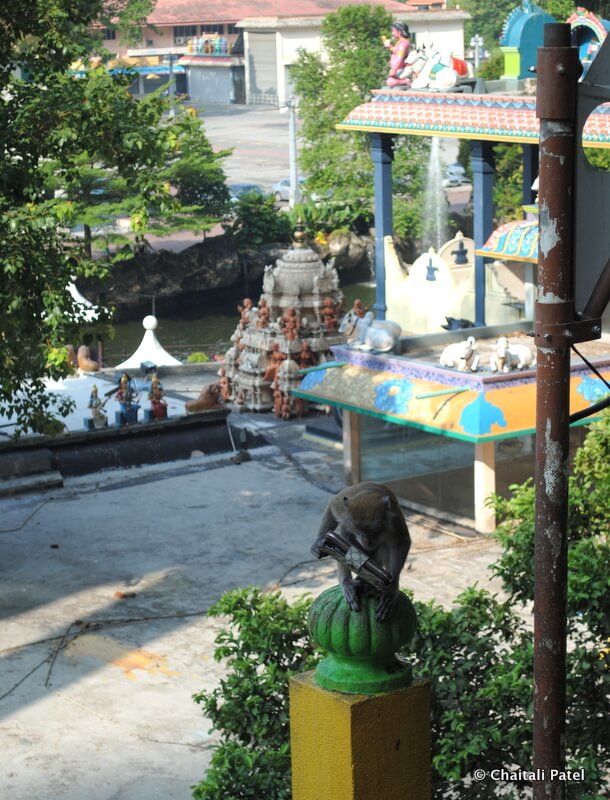 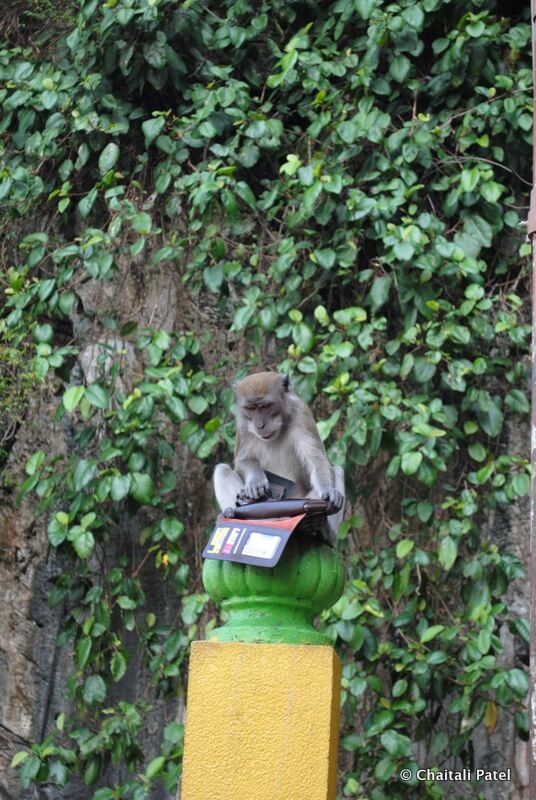 Coming from India, where monkeys are found commonly – we often have them visiting the garden in my mother’s building – when I was told about the monkey menace in Batu Caves, I didn’t pay much heed to it. As I stood there watching that day’s drama play out in front of me, I clutched onto my bag with all the strength I could muster, secretly thanking my stars that it wasn’t my bag.

Finally the monkey flung the bag much to the lady’s delight at finding nothing of value in her handbag and went away. Almost everyone on the steps seemed to have breathed a collective sigh of relief and move on.

The climb was steep but not too arduous, and once at the top – the shrine well hidden into the depths of the cave known as Temple Cave was a fascinating sight. The largest of the caves, Temple Cave has  a 100 feet high ceiling within which there are many small temples. The main temple which is situated right inside is dedicated to Lord Muruga. As we were visiting in the middle of the week and closer to noon, it was relatively empty and only a handful of devotees were offering prayers at the many shrines. 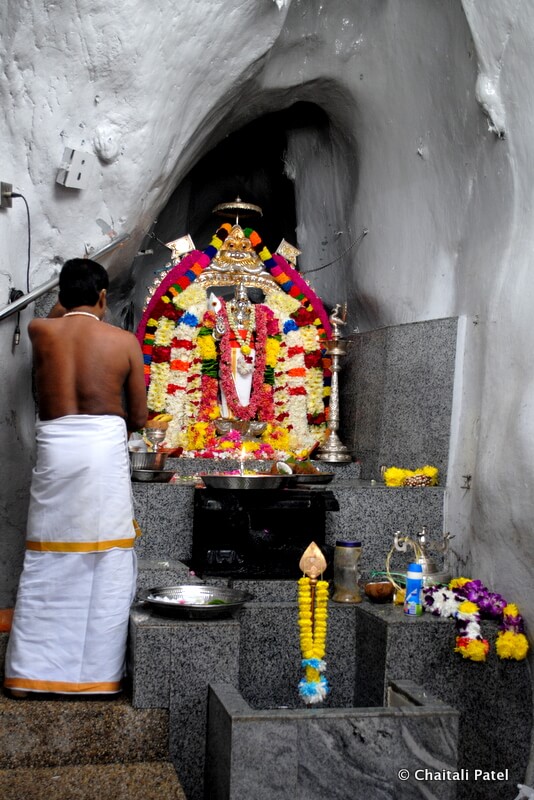 During the annual Thaipusam festival thousands of devotees flock to Batu Caves. A human procession starts from the Sri Mahamariamman Temple in Kuala Lumpur and culminates at the caves, with the whole celebration lasting almost 8 hours. During the festival many devotees carry their offerings of milk on decorated ‘kavadis‘ – an object that has 2 semicircular pieces of wood or steel that are bent and attached to a frame that can be balanced on one’s shoulders. Many devotees choose to pierce their skin, cheeks and tongue with metal hooks and skewers attached to their kavadis. A visit during Thaipusam is definitely not for the faint hearted!

We ended our visit to the caves with a delicious South Indian breakfast at one of the many vegetarian restaurants found near the base of the caves.


***
This trip to Batu Caves was made possible by Tourism Malaysia but all opinions expressed are my own .
11 Comments
By Chaitali