Many Colors of Udaipur 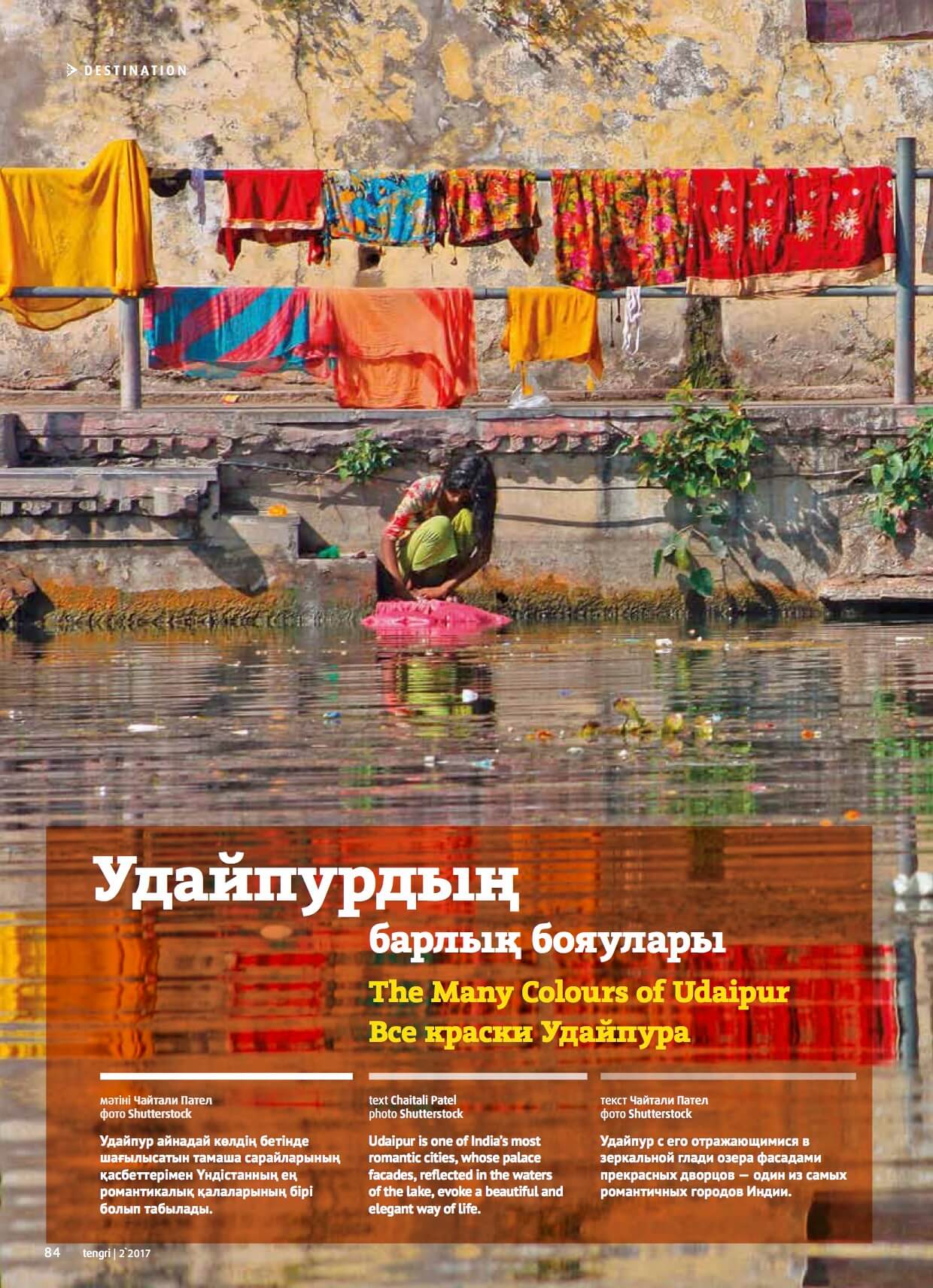 The moment our boat pulled away from the jetty and glided further into Lake Pichola is when I fell in love with Udaipur! If you could break up a day into parts, it was the most beautiful part of the day when the sky turns into myriad shades of pink before finally becoming an inky blue. The ochre City Palace shone in all her glory as if rising from the placid waters of Lake Pichola to put on a show for us mortal beings. As daylight fades and the palace lights start to come on, the ochre facade transforms into that of a glittering gold.

Built over four and half centuries, the City Palace (daily 9:00 a.m. to 17:30 p.m.) is an amalgamation of buildings constructed by different rulers of the Sisodia clan, but everything comes together seamlessly creating one imposing and luminous structure, which really is the jewel of Udaipur. One of the most visited historical sites in the state of Rajasthan, the City Palace is a treasure trove of small rooms, intricately carved jharokas, large courtyards, many winding and narrow staircases, and is a fabulous example of Rajasthani art, architecture and craft.

Walk through the Mardana Mahal and Zenana Mahal that have been painstakingly restored and preserved, to marvel at the opulence of the Mewar dynasty and to get a glimpse of the fairytale like lifestyle they led. Weaponry, personal artifacts, miniature paintings and other objects of daily use are on display, some in the exact same spot for centuries. Beyond the shine and glitter, the palace and its many displays also abound with stories of courage, heroism and valor.

Faced with growing threat of the Mughal empire, Maharana Udai Singh II shifted the capital of the Mewar kingdom from Chittorgargh to Udaipur in 1559. Nestled between the purple tinged Aravalli mountain range and built around a system of lakes, Udaipur named after Udai Singh II, served as a perfect spot for the Mewar dynasty who ruled Southern Rajasthan. Maharana Pratap, Udai Singh’s son and a worthy warrior took over the reign of the kingdom and further increased the might of the Mewar dynasty, successfully keeping the Mughals at bay. On display in the Mardana Mahal are Pratap’s original armor and weapons.

Proud of their rich heritage the locals are friendly and peace loving, welcoming visitors to Udaipur with open arms. Around the palace the old city spreads out throbbing with activity and chaos. Walking the streets of Udaipur is an art as you side step open drains, jostle for space with cows, pass by shops with wares spilling out onto the streets and navigate vehicles both small and large. Persevere with this mayhem and look deeper to discover some hidden gems in the nooks and crannies of the city. Stop and admire the work of miniature artists as they create intricate and colorful paintings which are as the name suggest small in size.

Close to the Badi Pol entrance of the palace is the spectacular Jagdish temple, dedicated to Lord Vishnu, the preserver of the universe. Built in 1651, the intricately carved marble temple is a sight to behold as is the statue of Lord Vishnu carved out of a single piece of black stone. In the evening, trek up the 32 marble steps up to the temple, where almost magically the city and her sounds are drowned out by chanting and the ringing of bells at the time of the daily aarti.

If the City Palace is the jewel of Udaipur, Lake Pichola is the heart of the city. At dusk, head to one of the city’s famous ghats, like the magnificent Gangaur Ghat, to catch the evening breeze and stunning sunset like the locals do. Watch young boys play a game of football and find a spot on the steps besides women in colorful saris huddled together catching up on the day’s events.

Almost all the buildings by the lake are budget or boutique hotels, and most have roof top cafes that offer splendid views of the city. At dinner time, if you would rather be at the water level then head to Hanuman Ghat where restaurants offer brilliant views of the palace shimmering in Lake Pichola. The restaurants have names varying from comical to the absurd, but the menu is standard, featuring a mix of Indian, Italian and Chinese dishes.

For more authentic Rajasthani fare head to Garden Restaurant (+91 294 2418881-4; daily from 11:30 a.m. to 15:00 p.m. and from 19:00 p.m. to 22:00 p.m.) for an all you can eat thali. Taste some authentic Rajasthani dishes such dal batti (a wheat flour ball which is steamed and then fried, and served with mixed lentils) and experience some splendid hospitality that will have you holding your stomachs begging for the food to stop!

After your meal explore the Maharana’s vintage car collection that is located in the same premise. The Maharanas were undoubtedly men of good taste and had a bevy of classic cars, including a 1934 Rolls Royce Phantom that was featured in the James Bond film, Octopussy parts of which were filmed in Udaipur. Also on display is a convertible Cadillac that drove Queen Elizabeth II to the airport in 1961. (+91 294 2418881-4; daily from 9:00 a.m. to 21:00 p.m.; entry INR 250 per aduItand  INR 150 per child between 5 to 12 years of age)

The passage of time has only added to the allure of Udaipur, which continues to charm people from all walks of life. Despite the chaos, crowds and issues plaguing many urban Indian cities, Udaipur retains and radiates a romanticism that’s unmissable. People from all over the world flock to the city to tie the knot here in a setting that’s unparalleled – either within the luminous confines of the City Palace or on the floating islands of Jag Mandir and Jag Niwas. Made of white marble sourced from the hills around Udaipur, Jag Niwas, known as the Lake Palace Hotel is often ranked as one of the best hotels in the world.

As we glided on the serene waters of Lake Pichola, lulled by a cool evening breeze, the city surrounded us in all her magnificence and Udaipur’s indisputable charm ensconced me. 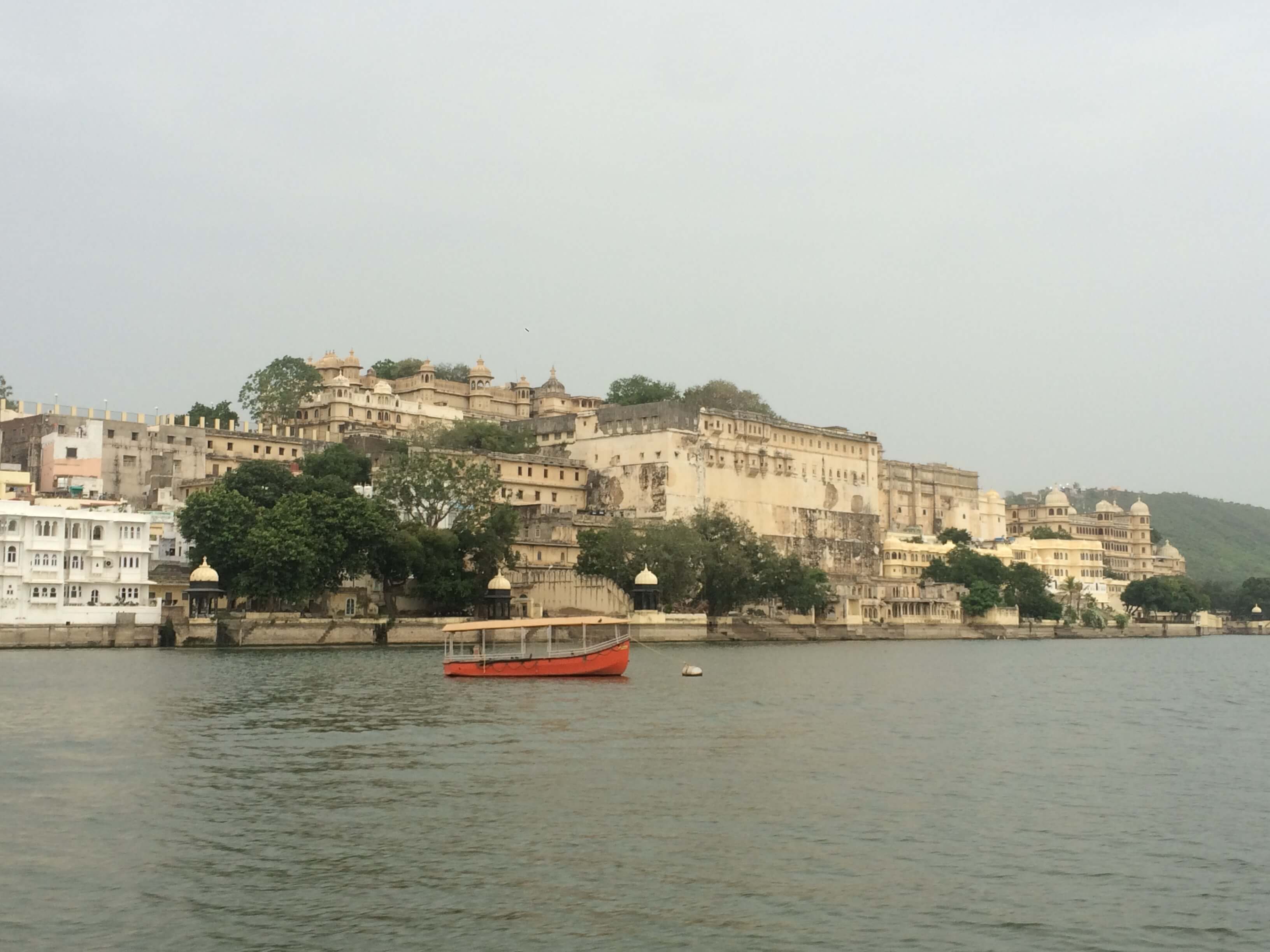 Reserve an evening to visit the 18th century Bagore Ki Haveli, where in a courtyard under a neem tree, performers showcase some of the finest dance and music from across the state of Rajasthan. Watch men and women dressed in colorful costumes, swirl and twirl with abandon, some balancing thirteen pots on their head while others have cymbals tied to different parts of their body. (www.dharoharfolkdance.com ; +91 294 2482322 and +91 94141 55904; daily 19:00 p.m. to 20:00 p.m.)

Maharana Sajjan Singh a man of refined taste and eye for the finer things in life, commissioned the Birmingham based F&C Osler Company in 1877, to create various items made of exquisite crystal. His order included sofas, tables, chairs and a bed, amongst other objects, all made of crystal and bearing the crest of Mewar. In a tragic turn of events, the Maharana passed away before his order arrived and the entire collection lay forgotten for over half a century. Under the tutelage of the present Maharana Shriji Arvind Singh Mewar the incredibly rare collection was thrown open to visitors in 1994. (entry INR 550 per head)

The Trident, Udaipur is set in a sprawling 43 acre plot of land at the edge of Lake Pichola. Stay here to experience living like royalty amidst landscaped gardens, where peacocks roam free; and sight wild boar and spotted deer at the hotel’s 150 year old wildlife conservatory. The rooms are modern and equipped with everything you would need for a comfortable stay. There is a dedicated children’s play zone, with many activities to keep the little ones busy. ( www.tridenthotels.com/hotels-in-udaipur; +91 294 243 2200 and +91 294 515 2200)

Right in the midst of the action and close to the City Palace, Jagat Niwas is a beautiful haveli that has now been converted into a heritage hotel. Sitting in one of their cozy jharokhas (alcove) overlooking Lake Pichola and the floating islands of Jag Mandir and the Lake Palace Hotel,  and watching the sun go down is highly recommended. ( jagatcollection.com/jagatniwas/index.html; +91 294 2422860 and +91 294 2420133)

Walking is the best way to explore the old part of the city. For a longer distance jump into one of the many autos that ply across the city. Always negotiate the fare beforehand as most of these don’t have working meters.

There are regular flights to Udaipur from Mumbai, New Delhi, Jaipur and Kolkata. Udaipur is also well connected by road to Ahmedabad, Jaipur and Jodhpur.

Summers can be searingly hot. Days are warm and evenings are pleasant in the months of September to March. Night time during the winter months can get very chilly.

A slightly modified version of this piece was published in Air Astana’s in-flight magazine Tengri.