I was in Kuala Lumpur (KL) end of December 2013 with my husband and daughter. Our choices of things to do were obviously driven by what would interest our daughter the most, while ensuring that we stuck to her meal times and nap times as far as possible. KL has a fun nightlife and we took turns going out. KL is a fantastic city to visit with children – read about it here. But if you are visiting KL alone, with friends or with your partner here is a fun 2 day itinerary for you.
Start your day at Central Market – KL’s oldest wet market, built in 1888 by Yap Ah Loy, the city’s Chinese Kapitan. In the 1980s, the wet market gradually moved to another location and the building was eventually converted into a center for Malaysian arts and crafts. But the market as it stands today, owes its transformation to the Kha Seng Group, that acquired the building in 2004 and invested a considerable sum to upgrade the structure, while retaining its old world charm and character. The market and its annex popular with tourists and locals, is the best place to buy malaysian handicrafts and souvenirs in KL. Find magnets, batiks, wooden sculptures, masks and lots of other things here. To showcase Malaysia’s different ethnic groups, there are specific areas dedicated to them and aptly titled Little India, Straits Chinese and Lorong Melayu. As most markets, be ready to put your bargaining skills to test. 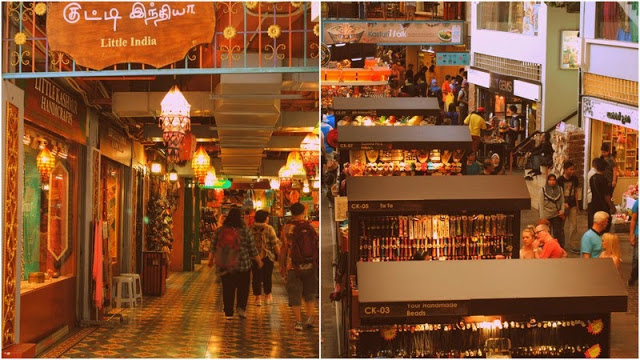 If shopping is not your thing, never mind, Central Market is still worth a visit. Walk through the Central Market Annexe that houses a number of art galleries. Look at displayed art as well as see artists at work.
From the annex walk out onto Kasturi Walk, a popular KL attraction. Opened in 2011, the outdoor, covered walk is lined with kiosks and stalls selling knick knacks and a variety of popular street foods. Try the ‘king of fruits’ – Durian. The thorny green fruit (similar to jackfruit in appearance but smaller in size) is a favorite with locals. But Durian is an acquired taste, either you love it or hate it. 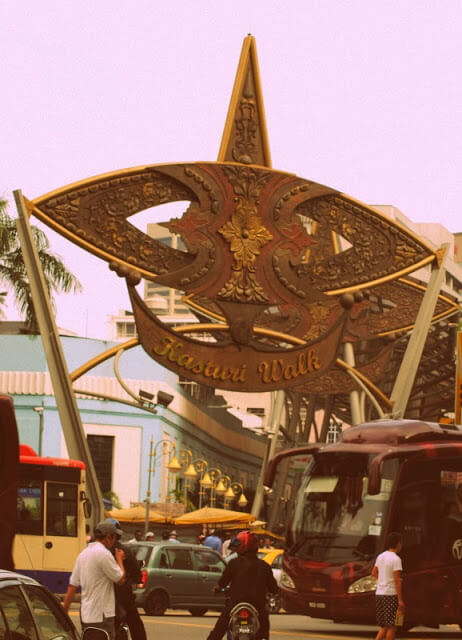 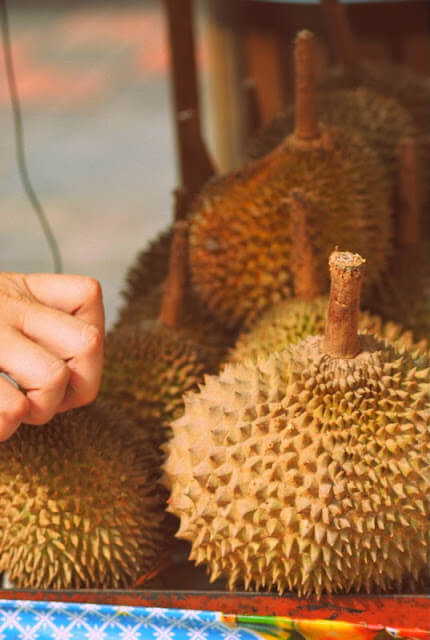 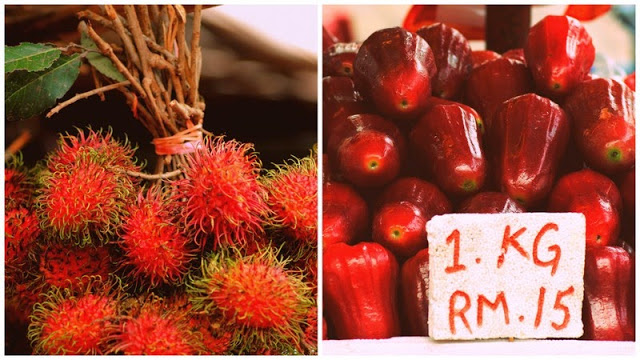 If you happen to be in the market at lunchtime, head to the first floor where there is a food court with many counters selling Malaysian specialities and one or two standalone restaurants. We ate at the Ginger Thai (Lot M12 Central Market, Kuala Lumpur) restaurant – with jade green walls, assorted wood and cane furniture and cupboards filled with interesting curios for company. The food is great and they whip up vegetarian food on request. If you want to experience dining at a typical Muslim Malaysian eatery – head to this Mamak restaurant located at the back of the market. ‘Mamak’ refers to Tamil Muslims of Malaysian nationality. India and Malaysia have shared very strong trade ties in the past and a lot of people also moved to Malaysia from India seeking employment opportunities. A Mamak stall / restaurant offers reasonably priced food in a casual dining atmosphere. Their menus are extensive, but most serve Teh Tarik (a very sweet milk based tea – the local drink), the very popular Roti Canani, Roti Tissue, Nasi Lemak, Nasi Kandar and Nasi Goreng. 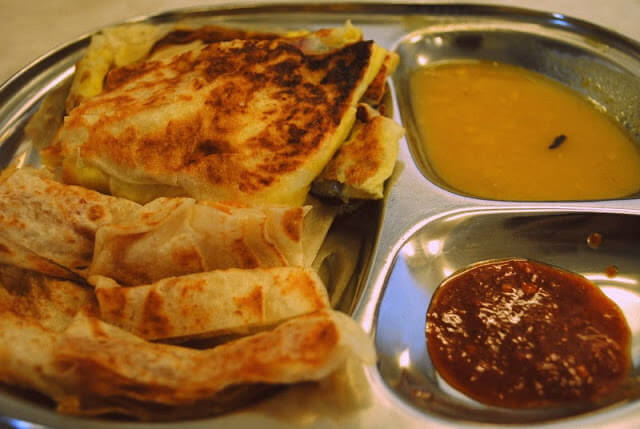 Have a leisurely lunch cause after this I recommend some walking around and you don’t want to do that under KL’s sweltering afternoon sun.

Malaysia is truly a country of acceptance having beautifully integrated immigrants with locals over several hundreds of years. The result is a fascinating multi-cultural, multi-ethnic country where different religions are allowed to be followed and practised. Spend the afternoon exploring KL’s famous places of worship – the Sin Sze Si Ya temple, Mahamariamman temple and Masjid Jamek. All of these are walking distance from each other and from the Central Market. Get hold of a good road map to find your way around. (I explored these places on a walking tour around the area with Malaysia Heritage)
Kuala Lumpur’s oldest Chinese temple – Sin Sze Si Ya temple, was founded in 1864 by Kapitan Yap Ah Loy and is dedicated to patron deities of Sin Sze Ya and Si Sze Ya. As the board outside the temple declares, ‘the temple has witnessed the birth and growth of our great city Kuala Lumpur.’ Frequented by locals, walk around and soak in the atmosphere of calm. The rich red – a dominant color across Chinese temples, the ornate altars and colorful deities, fumes of incense sticks and faces filled with devotion, make it a visual delight. 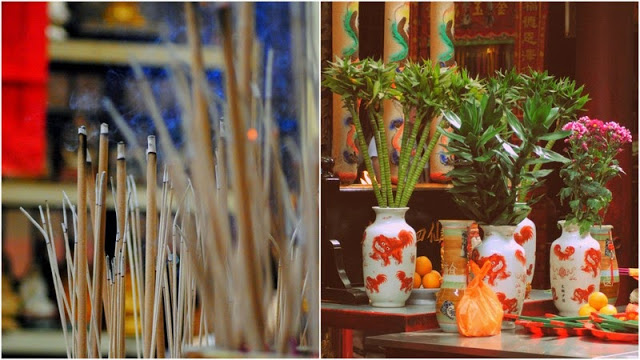 Many Indians have made Kuala Lumpur home and have contributed to the country’s progress in many ways. A wealthy immigrant, K. Thamboosamy Pillai built the country’s oldest Hindu temple – the Sri Mahamariamman temple in 1873. Built for the family’s personal use, the temple was eventually handed over to a trust and opened to public. The impressive 5 tier gopuram (tower) of the temple has 228 intricately carved idols. The presiding deity – Mariamman – is widely prayed to by Tamils, particularly those living outside India, as she is considered to be the protector of those who venture into faraway lands seeking new opportunities. This is one of the few temples in the world where photography is allowed inside, so make the most of it. 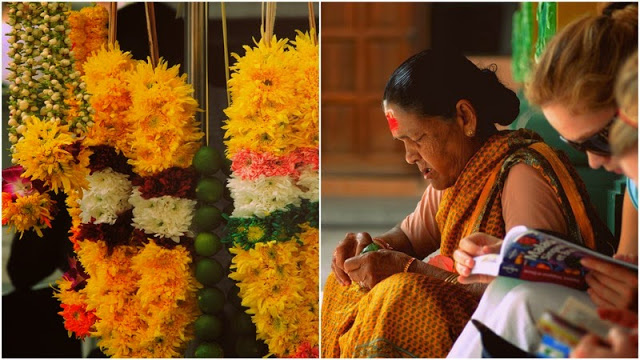 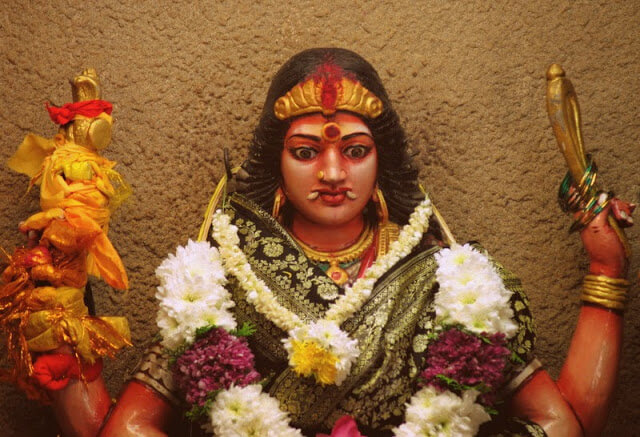 Walk a little further to the birthplace of present day Kuala Lumpur – it is here that Jamek Masjid stands – at the confluence of Sungei Klang and the Sungei Gombak. Built in 1907 the mosque was officially opened by the Sultan of Selangor on 23rd of December 1909. Surrounded by coconut and mango trees, the mosque’s design is heavily inspired by Mughal architecture. 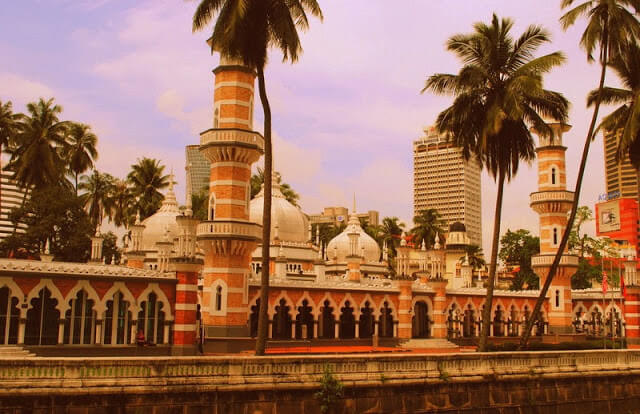 After all this walking around, take a cab to Chankat Bukit Bintang. As the sun goes down and the neon lights come on, relax over a drink and food in one of the many pubs that line the street. The street has a very unique feel as most buildings that are now pubs were earlier pre-war colonial shops. For a change of scene walk a little to the Taps Beer Bar on Jalan Nagasari. An interesting entryway made of rows of empty beer bottles of all kinds leads you into a warehouse style bar. The highlight apart from the wide variety of beers on offer are the great live bands that perform almost every night. If the music at the Taps Beer Bar does not appeal to you walk a bit more to the Pavilion Mall in the trendy Bukit Bintang district. While the mall has a number of restaurants and pubs to choose from, if you want to sing along loud and watch the locals let their hair loose, walk into Tom, Dick and Harry. Its not uncommon to find patrons standing outside enjoying the music as tables inside are almost always full. The pub is know for its fantastic live music, lively atmosphere, superb choice of beers and some finger-licking good pub food.
Start your next day with a visit to the KL Tower . Opened to the public on the 23rd of July, 1996, this Kuala Lumpur icon has lots of things to do inside and around. Choose from exploring a Malaysian Cultural Village, an aquarium, an animal zone, go for a nature walk in the Bukit Nanas forest reserve, feel the adrenalin rush as you get the chance of driving an F1 in the F1 simulator zone and more inside the premises.
Resist the temptation to grab a bite there, instead go to Pavilion Mall to eat at Din Tai Fung, an award-winning restaurant of Taiwanese origin. Their popular Xiao Long Bao (dumpling) is made from a recipe that has been in existence over the last 30 years. The simple unassuming white dumplings are delicious as is practically everything else on their menu.
Spend the afternoon indulging in some serious retail therapy. For variety go to Suria KLCC , at the heart of the Golden Triangle. Apart from every brand that you can think of, the mall has a science discovery center, a concert hall where the Malaysian Philharmonic Orchestra performs, and an art gallery. The best way to end your trip to KL would be to go up the Pertonas Towers and watch 1000s of lights come on as the sun goes down. The Towers are more than an architectural marvel – they are a symbol of what Malaysia stands for today – one of Asia’s leading economies and powerhouses.
Going up the Petronas Towers needs some pre planning – read about our experience here.
After your visit to the Petrona Towers head to one of the many fine dining restaurants around, some offer fantastic views of the city’s skyline. http://www.shangri-la.com/kualalumpur/traders/dining/bars-lounges/sky-bar/ at the Traders Hotel is one of the most well known watering holes in town, offering splendid views of the twin towers (one of the main reasons why people flock to it!). If you would like to end your trip with a knockout experience walk to Jalan Alor – KL’s street food mecca. Be ready for Jalan Alor will drench your senses with sights and smells of every kind. The street comes alive at night when hawkers put out their tables and cook up local delicacies. There are also a number of Mamak stalls here if you missed eating at the ones in Central Market.
Have you been to KL? What would you add to this itinerary? If you are planning a trip is there anything in addition to the above that you plan to do / see?
Here are some sites that I found particularly useful when planning our trip:
Malaysia Site
Tourism Malaysia
101 things to do in KL
5 Comments
By Chaitali