Possibly after Scotch Whiskey, the Highlands and the bagpipes, Nessie is the other big draw for visitors to Scotland.

But what or who is Nessie?

It’s not a person, it’s not a place, it’s not a dish, it’s not a symbol, but a monster, that is believed to be hiding deep within the dark impenetrable waters of the Loch Ness!

Lochs are integral to Scotland’s stunning landscape and according to Wikipedia, Loch is a Irish and Scottish Gaelic word for lakes or sea inlets. While Scotland has many Lochs, Loch Ness is the most famous of these water bodies. Its the second largest Loch in Scotland by surface area, but given its depth its the largest by volume in the whole of the British Isles.

Loch Ness is part of the Great Glen, a valley that stretches 73 miles from Fort William to Inverness. Ben Nevis, which is Scotland’s tallest mountain is also part of the Great Glen. When the Ice Age ended many million of years ago, the glaciers melted and the resulting melted waters created the various Lochs. Abundant water, lush forests and the rich wildlife, led to man eventually settling across the valley. A picture of peace and serenity today, the Great Glen has witnessed many fierce battles that have been fought to gain control over precious territory.

Who has seen Nessie?

Saint Columba was the first person to have seen Nessie 1500 years ago in the year 565 AD. In 1933 when two people reported seeing a strange animal cross the road in front of their car, Nessie captured the world’s attention. Over the years there have been over 1000 reported sightings of a strange animal, but there is no recorded evidence that such a monster does exist.

Possibly the most popular photograph of Nessie is that taken by a surgeon from London in 1934, that shows an animal with a really tall neck sticking out of the water. However, the validity of that photo was widely debated and it was later proved that the photo was fabricated.

Year after year thousands of people visit Loch Ness hoping to spot Nessie, and some have even made it their life’s ambition to spot and record the monster. Known as the ‘Nessie Hunters’ these people have dedicated their lives trying to prove that the monster does indeed exist.

A circus owner offered a reward of 20000 pounds to anyone who could capture the Loch Ness monster for his circus.

What makes Loch Ness the perfect hiding spot for Nessie?

Loch Ness which is 23 miles long and has a surface area of 22 square miles stores a lot of water and is very deep making it a perfect hiding spot for Nessie. The Loch holds more water than all the lakes in England, Wales and Scotland put together. At its deepest point, the Loch is 230 meters deep, which is three times as deep as the tallest theme park ride in Britain. Further, a high peat content means that the water is practically black in color making it very hard to look through it.

Almost all ships that sail down the Loch are fitted with sonar sensors to track any strange movements in the water. 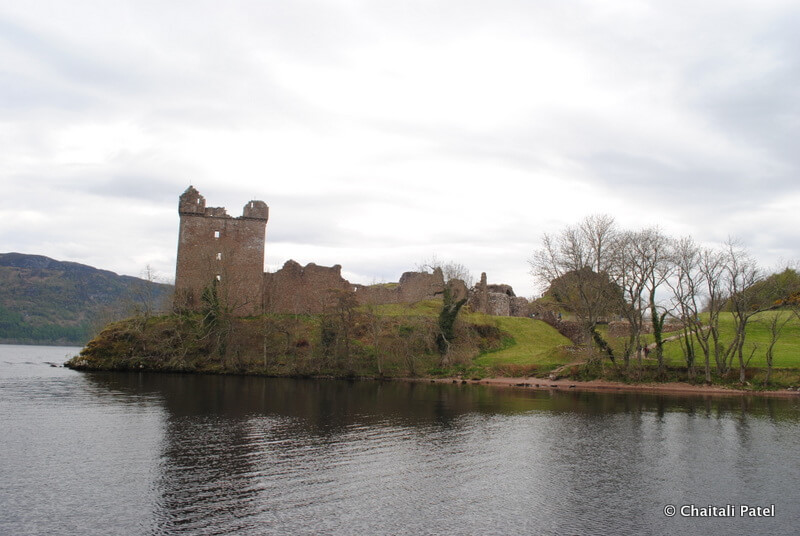 Urquhart Castle ruins on the banks of the Loch Ness

We visited Loch Ness from Inverness. The best way to experience Loch Ness is to take a cruise down its dark waters. There are a couple of cruise companies that operate cruises on the Loch. We went on a Jacobite Cruise – a company that has been taking people on cruises down Loch Ness since 1973. Cruises depart every hour and you might want to find out before hand the schedule for the day. We missed our cruise by barely a minute and had to wait a whole hour for the next cruise. To find out about Jacobite Cruises click here. During peak tourist season it might be best if you book tickets beforehand.

The cruise ships have two levels and if its not raining or not too cold, then the upper deck offers fantastic views of the Loch and its surroundings. Look out for the screen that shows the sonar readings.

All cruises have an interesting audio show that takes you through the history of the Loch and its most famous resident, Nessie.

Snacks and drinks are available on board all the cruises.

Children under the age of 5 go FREE. All little explorers are given a special backpack that has a fantastic activity pack with fun anecdotes and games about the monster.

Have you gone Nessie spotting and have you had any luck?