‘One of the greatest shows on earth’ is how the Lonely Planet describes Morocco, and what an apt description it is! Perched on the North Western corner of the African continent, Morocco is more Europe and Middle East than Africa.

Our flight from Dubai to Casablanca was roughly 7 1/2 hours long, and we had very interesting co-passengers. A majority of the men and women, looked to be above 60 and were wearing the traditional long flowing gowns called Jelabas in white and cream. In addition, women were wearing the Hijab, and the men their traditional caps. It was like looking at a mass of moving fabric dotted with fascinating faces crossed with tough weathered lines. The common thread was their deep dark eyes that seemed to speak out to us.

Their personality matched their exotic appearance. They spoke fast and in excited tones. Two old men suddenly started fighting while we were mid air and then they made up and chatted away. When we touched down in Casablanca, everyone started clapping. It seemed that they were celebrating a safe landing. If you thought chaos and the urge to all move at the same time was something typical to Indians, then think again! It was a feat that we managed to get our bags amidst all the pandemonium at the airport.

My companion and I were staying at a youth hostel located in the Ancient Medina area of Casablanca. Located right next to the port, the youth area is buzzing with activity and is very different from the other parts of the city as we later discovered.

Casablanca has a mix of Art Deco buildings and some modern structures. It’s not very green and most buildings are quite run down. The streets are not particularly the cleanest in the world, but the city sure has a lot of character.

The Ancient Medina, the old part of the city is undoubtedly dominated by the Hassan II Mosque. The mosque was the brainchild of late King Hassan II, who wanted to build this mosque at the Western most point of the Muslim world. Work started in 1980 and the mosque was inaugurated in 1994. The fact that this structure is not ancient does not take away from its magnificence. As you walk towards it and come in full view, the sheer size of it, takes your breath away. In the evening light, the ochre colour turns to gold and the structure looks like it is emerging out of the rich blue, dark sky.

Designed by a French architect, Hassan II Mosque is the 3rd largest mosque in the world, after the Mecca and Medina, both located in Saudi Arabia. 1/3rd of the structure is built on land reclaimed from the ocean, keeping with the Koran that says that ‘the throne of god is built on water’. 6000 workers and nearly 3000 craftsmen worked day and night to complete this magnificent structure. Half a billion dollars were spent and most of it came from public subscriptions. All the materials used have been locally sourced from Morocco, except the white marble around the Mihrab and the chandeliers in the main prayer hall that came from Italy. The mosque can seat 25,000 people inside and about 80,000 people can be seated if you include the square and the open area around the mosque. The Minaret is 200m tall and there is a green laser beam that points towards Mecca. 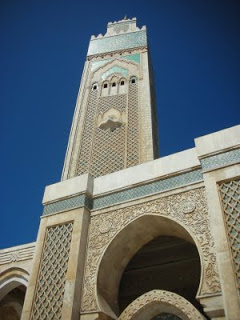 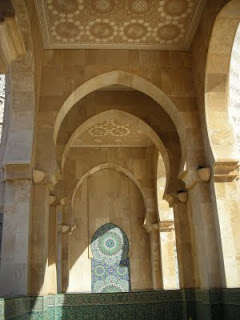 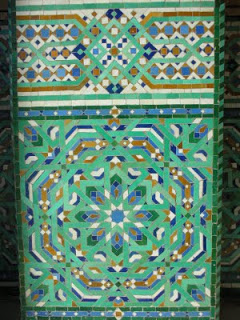 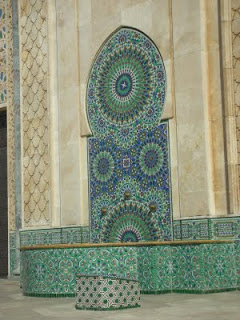 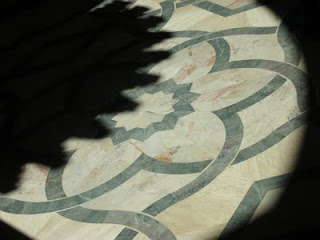 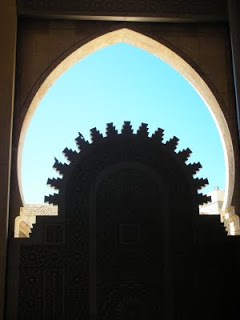 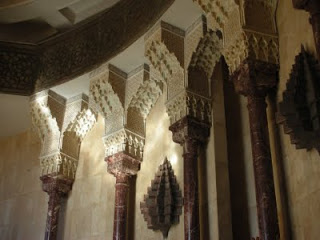 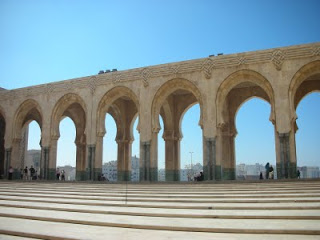 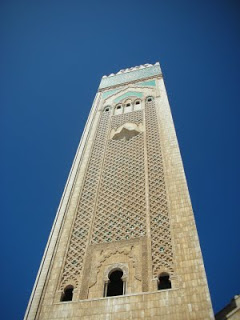 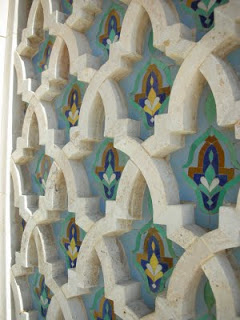 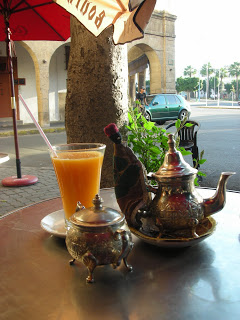 Down one such street we came upon Hotel Guynemer, where we sampled our first traditional Moroccan meal – a salad, thick lentil soup, a vegetable tajine and a mutton tajine.

Our hotel, HOtel Central, a quaint white building with bright blue window panes and grills, was located close to the port. It overlooked a square that had a post office, several cafes, a well stocked grocery store and even a Hammam or public bath. At all times of day we saw people sitting around chatting, hooting and sometimes fighting, and all this goes on till the wee hours in the morning.