And She Was Seen – The Mighty Kangchenjunga

Over breakfast one morning I heard a family next to us talk excitedly about sighting the Kangchenjunga from our hotel. It was our first morning in Gangtok and I had woken up leisurely. After breakfast I went to the window near the reception and stuck my head out but all I could see were green rolling hills that seemed to envelope Gangtok. There was no snow capped peak anywhere in sight however long or hard I peered.
We were in Gangtok at the start of summer and daybreak used to happen very early. In fact at 4:30 a.m. it would be as bright as if it was 7 a.m. So the next morning when I saw that it was 5:30 a.m. I jumped to the window to make sure that I didn’t miss sighting the Kangchenjunga, but alas there was nothing there. The same hills stretched out in front with clouds that seemed to sit on them like a crown. At the other side, a group of boys were already out practicing football as the rays of the morning sun warmed the rooftops of the matchbox like houses and buildings of Gangtok. I just took in the beautiful scene and snuggled back into my cosy bed. 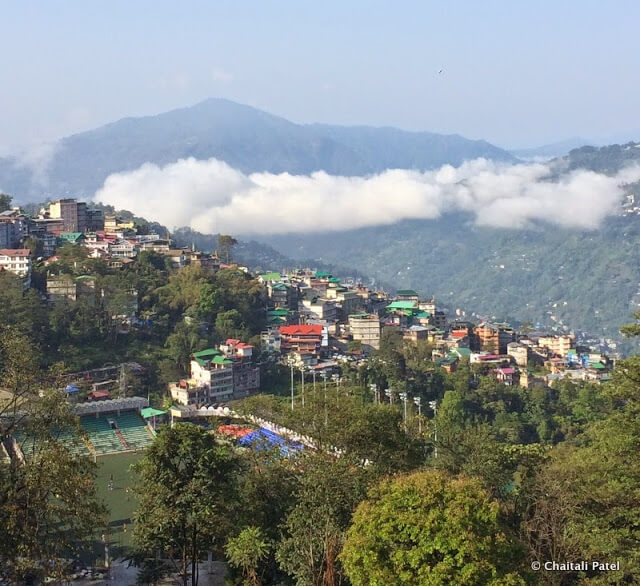 Exactly an hour later my mother began to mumble as she looked out the window. I looked out, the cloud cover had moved and there she was in all her glory. We felt excited at the sighting like little children would spotting a candy store. Quickly the zoom lens came out and after a few shots, when I felt certain that I had taken some decent ones, I left my camera and just stood there soaking in the majesty of the Kanchenjunga. Soon enough the clouds covered the peaks making it almost impossible to believe that there lay something so magnificent just behind. 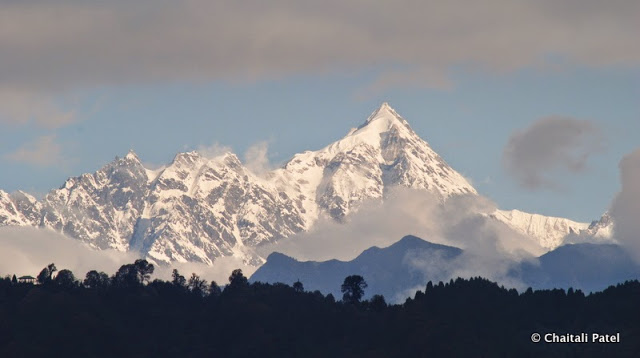 Kangchenjunga or Kachendzonga bordering Nepal and Sikkim, is the third highest peak in the world and the highest in India. The name literally translates into the Five Treasures of Snow or the five peaks that form the mountain. Revered amongst the people of Darjeeling and Sikkim, the mountain seems to guard this area with her presence and power. Visible from Darjeeling and Gangtok, Pelling in West Sikkim offers jaw-dropping views of the mountain.

I don’t know if the conventional way to refer to mountains is masculine or feminine, but when I think of the Kangchenjunga automatically I refer to the peak as “she” and so will stick to that.
10 Comments
By Chaitali